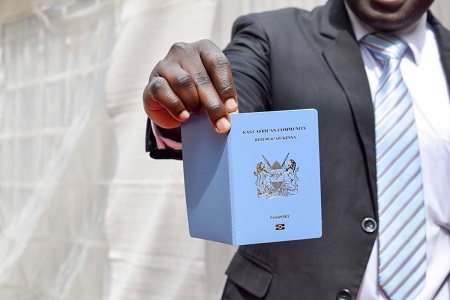 Two concerned parties have asked court to nullify government’s decision to phase out paper passports and replace them with electronic ones.

In December 2018, the government announced that they would recall Ugandan passports and issue East African passports at a fee starting January this year.

However, city lawyer Michael Aboneka together with Centre for Constitutional Governance (CCG)  are challenging the process of recalling all Ugandan passports without enacting an enabling law to guide the process.

The Complainants contend that by recalling Ugandan passports by 2021 regardless of their expiry date, the ministry’s is acting in breach of contract with the people.

“That the same ministry has not sensitized the Ugandan citizens on the new venture leaving them to the mercy of God. That there is therefore no clear law under which the ministry is proceeding to recall Ugandan passports and issue out the East African passports to Ugandan citizens,” reads the complaint.

Through its lawyers of Thomas and Michael Company Advocates, the activists are seeking for orders to restrain the Ministry of Internal Affairs from recalling Ugandan passports and replacing them with East African passports without legal basis in the Ugandan domain.

“Under the rule of law, government is accountable to Ugandans, should be transparent and whatever it does should be in line with aspirations of the people,” the parties lawyer, Gawaya Tegule told High Court registrar Sarah Langa on Monday.

“There is no law under which government is proceeding to issue East African passports.”

The lawyer argued that before the process of recalling Ugandan passports and issuance of new ones, government ought to first sensitize the public and get consent of the legal regime.

He noted that it will do no harm for government to halt the process and wait for determination of the main case before Justice Musa Ssekaana, whose hearing kicks off in March.

“This court should issue an interim order halting the process until the main application is heard and disposed of,” the lawyer argued.

The Ugandan government through the Attorney General however told court that issuance of an interim order will be an abuse of court process since the case has been overtaken by events.

“Government started receiving applications in December last year and some applicants have already got and are using their international East African passports,” Allan Mukama, who represented the Attorney General told court.

He argued that halting a process which has already kicked off will be a wastage of the taxpayers’ money by court.

Must read: What you will need to get an ePassport in Uganda

High Court registrar Sarah Langa adjourned the matter to Friday January 25 to deliver her ruling on the interim order sought for by the two parties.

This is the second case brought against the Ugandan government challenging the legality of process of issuing electronic passports.

In December last year, government jointly with the secretary general of the East African Community (EAC) were dragged to East African Court of Justice challenging the move to charge its citizens Shs250,000 to acquire a new EAC E-passport.

Mr Norman Tumuhimbise, Mr Arnold Musoke and a nongovernmental organization labelled ‘Youth Line Forum Ltd’, filed the case claiming that the period given to the Ugandan citizens to switch to international EAC ePassports, is not sufficient and exclusionary to both Ugandans living both within and abroad contrary to the principals of equality, accountability and the rule of law.

They contend that Uganda’s charge for the ordinary international EAC E-passports makes it one of the most expensive in the region compared to Kenya’s and Tanzania who are charging for the same at Ksh4,550 (over Shs160000) and Tsh50,000 (Shs 800000) respectively.

National ID data to be used to process new e-passports