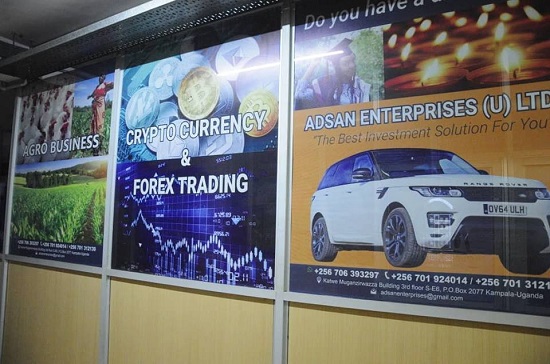 Police in Katwe, a Kampala suburb have arrested two people, who were working with a multi-level marketing company Adsan Enterprises for allegedly defrauding people to the tune of Shs812 million and investing part of that money in cryptocurrency ventures.

According to a September 2 police statement, the prime suspects who were running the company operating at Muganzaliwaza building SE6 in Kampala are Simon Musinguzi and Daniel Kalyango.

The operation to arrest the duo, according to the statement, was conducted after “about 38 people reported cases to police alleging that the company had taken money from them after assuring them of returns, which failed to materialize.”

Police says that Adsan Enterprises started operating as a company that deals in supplying chicks to poultry farmers at a subsidized price with a solemn promise of a ready market after growth.

The company properiators duped clients into believing they had won some contracts into supplying dry food ratio and chicken to some NGOs like United Nations High Commissioner for Refugees (UNHCR) and World Food Program (WFP) hence a ready and available market, says police.

Police was told by one of the suspects that the first months of doing business, things were a bit successful till the numbers of clients grew beyond the unexpected, hence chanelling the money into different ventures like cryptocurrency, leaving their clients frustrated.