On the 31st of May, Makerere University, on their official Twitter page, announced the launch of the Cassava Application, a mobile platform which tracks and monitors the certification and distribution of clean cassava planting materials.

The application was designed by Drake Patrick Mirembe, a PhD holder in Information Systems Security from Groningen University and a graduate from School of Computing and Informatics Technology-Makerere; Settumba Mukasa, an associate professor at School of Agricultural Sciences; and Dr. Jude Lubega, a professor of Computer Science in the School of Computing and Engineering at Uganda Technology and Management University (UTAMU).

The application comes under the implementation of the Makerere University Cassava Community Action Research Project Cassava CARP Project that was launched in 2014.

The project was launched to address the challenges that threaten the production of cassava such as the Cassava Mosaic Disease. This project is falls under Community Action Research Program (CARP) of the Regional Universities Forum (RUFORUM).

According to the CARP website, the project aims at enhancing sustainable production, processing and marketing of cassava and cassava products among the smallholder cassava farming communities. Specifically, the project is focusing on production of virus-free (clean) cassava planting material.

The government of Uganda through the National Agricultural Research Organization (NARO) made numerous efforts towards solving cassava disease challenges by distribution of disease resistant cassava varieties which were also caught up with merging diseases.

Cassava CARP team then carried out an investigation to identify the probable causes of diseases in cassava. The challenges included monitoring seed multiplication and documenting seed quality which contributed to distribution of cassava disease carriers among farmers.

With several households in eastern and northern Uganda depending on cassava as their sole starch staple food and source of income, more efforts have been made to solve the challenges instigated by diseases in cassava production which these two regions depend on.

The platform (both web-based and mobile app) offers services to its users such as farmer profiling, garden profiling, cassava garden inspection and certification management.

Through this, farmers are able to access source garden inspection reports and verify authenticity of the material source and supplier. In addition to the above, farmers can rate and comment on the quality of received materials from suppliers. 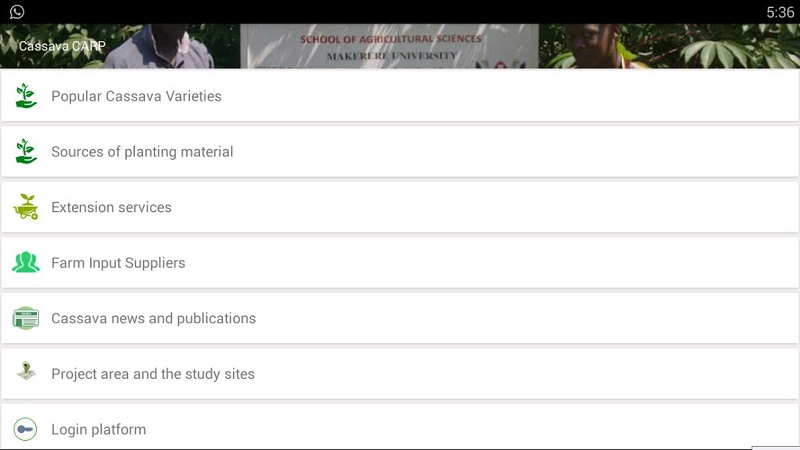 Features of the app

This information can be made available to the inspectors and certifying agency who take part in curtailing the supply of poor quality material which often results into spread of cassava virus diseases.

The application is currently in use by some famers in the 4 districts of the CARP project area of Apac, Bukedea, Kole and Serere. The application can be downloaded for Android users through this link.

The App is a clear indicator that of the country’s effort to digitize the agricultural sector which was a major theme for this year’s private sector forum.

Recently, in a related development, Prime Minister Ruhakana Rugunda announced a nationwide electronic registration of farmers after government acquired a loan of over Shs500 billion.