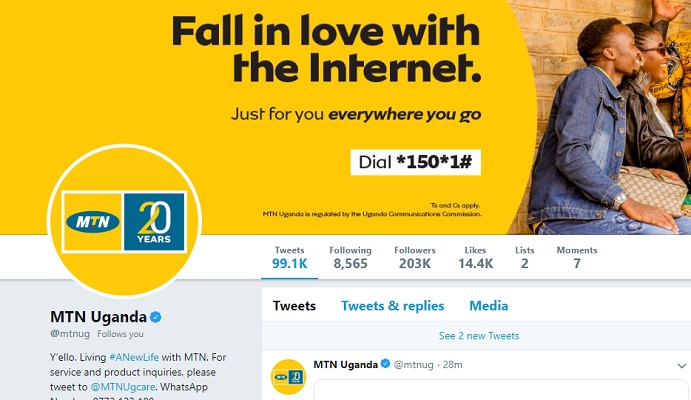 In the screenshots seen by this website, the hackers posted a series of pornographic videos, captioning them with jumbled words. For instance, one reads: “Rwanda Liverpool Champions League Arsenal Tottenham Manchester United #AJATOT Spurs Lucas Moura”

In a Thursday afternoon statement shared on social media, MTN Uganda said the situation had since been contained.

“Unknown hackers on the night of 8 May 2019, accessed MTN Uganda’s official Twitter handle, @mtnug and posted inappropriate material and content,” in part, the statement reads.

“This situation has now been contained and measures taken to prevent further breaches. We regret any inconveniences caused.”

The hack into MTN Uganda’s Twitter accounts comes hot on the heels of recent attacks on the company’s mobile money system which saw users and agents lose hundreds of millions of shillings. MTN said it compensated people who lost funds.

But this didn’t stop Twitter users like @kaz_ian to question the company’s capacity to protect their mobile money in the wake of this absurd development.

If ur this easy to hack what guarantees the safety of our mobile money 😑 pic.twitter.com/HUC31o7Nnt

MTN, in the statement, did not indicate whether it had identified the hackers. Even, in the mobile money incidents, the hackers were never revealed or how their pursuit progressed.

.@mtnug after the insult you put us through yesterday,I suggest you extend our Gaga bundles to Monday…our eyes need to heal😭 pic.twitter.com/WF0MDGOelK