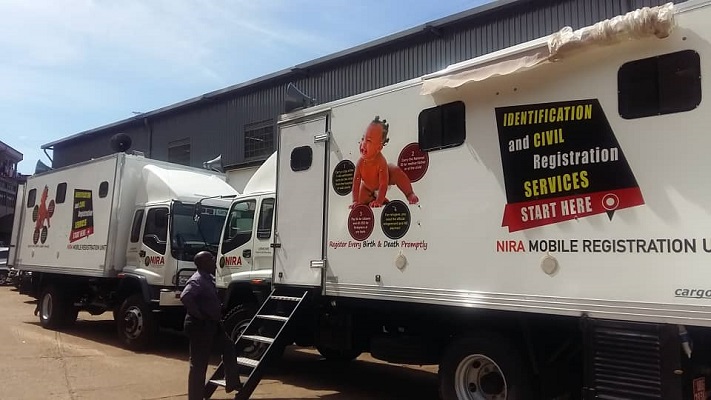 The National Identification and Registration Authority (NIRA) announced Thursday that it had acquired two vehicles that will facilitate a new wave of registration for nation IDs, birth and death certificates among other services the Authority offers.

According to a statement released on Thursday, the trucks which were procured with support from the World Bank through Uganda Reproductive Maternal and Child Health Services Improvement Project (URMCHP) were delivered to the Authority’s Executive Director Judy Obitre-Gama on Monday.

Ministry of Health Permanent Secretary Dr. Diana Atwine handed over the trucks to Gama at the Ministry’s headquarters in Kampala.

“The main objective of procuring the equipment is to enhance mobility and service reach in support of efforts by NIRA to scale up birth and death registration in the country,” She was quoted as saying.

For her part, Dr. Atwine said the initiative would go a long way in improving maternal and child health services.

“I am very optimistic that NIRA and the country at large will realize an increase in the proportion of people registering and obtaining birth and death certificates,” she said, according to the statement.

“Birth and death registrations are a critical component in the overall health sector agenda aimed at improving maternal and child services in the country,” she added.

The National Identification and Registration Authority (NIRA) on Monday received two new mobile registration trucks that are to be used to boost its registration capacity. pic.twitter.com/h2fhg8wDFU

Birth registration provides confirmation of the event of the birth of a child and is the first form of identification.

The trucks are intended to be used as mobile platforms to take services closer to communities through outreaches and routine registration activities, says NIRA.

“The outreaches shall be targeting populations in underserved districts or regions especially those with large and longer distances between communities and NIRA service points,” reads the Thursday statement. “It includes densely populated areas that may not be ably covered under the routine district registration centers.”

Remember, there’s also an option of applying for the national ID online and you can check out the process here, even that of replacing a national ID and acquiring a birth certificate.

Also, remember you need a national ID to apply for the epassport.

NIRA: What to do when your fingerprint was inaccurately captured during registration