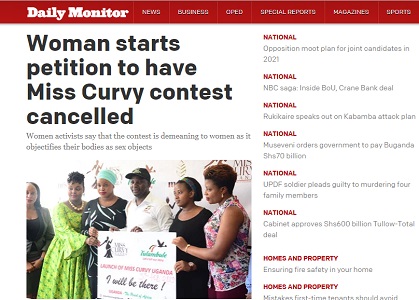 Uganda Communications Communication Commission has directed Monitor Publications Limited, the publisher of Daily Monitor (newspaper and website) to halt publishing web content until it settles its case with the communications regulator and the Speaker of Parliament, Rebecca Kadaga.

Six days ago, monitor.co.ug reported that a traditional healer named Damian Akuze, a resident of Kamuli district had dragged Kadaga to court demanding Shs200 million for a charm he allegedly gave her to charm her way to the speakership.

Now, UCC says the story — which has since been deleted from the website, was “fake news” intended to damage the speaker’s reputation.

“Further reference is made to a complaint dated 4 February 2019 from the office of the Hon. Speaker of Parliament of Uganda wherein the Right Honorable Speaker of Parliament states that Monitor publications Limited, through its online news platform, allegedly published fake news against the person of the Speaker with the intention of damaging her reputation,” reads in part a Feb. 6 letter to Monitor Publications signed off by the Commission’s Executive Director Eng. Godfrey Mutabazi.

In 2018, UCC issued a directive demanding online data communication services to register with it before operating in Uganda.

And, according to UCC, Daily Monitor up to now hasn’t registered its online unit.

UCC says for the website to operate again, Monitor Publications has to first “apply for and obtain the requisite authorization from the Commission in accordance with law and the Commission’s earlier public directives.”

The Commission has tasked the media company to file its basis of publishing the story about Kadaga, showing “cause why the Commission should not institute criminal proceedings against the Daily Monitor for broadcasting without a license contrary to section 27 of the Uganda Communications Act 2013.”

Mutabazi says if Monitor Publications doesn’t comply “the Commission shall proceed to determine this compliant and may issue any regulatory sanctions in accordance with Section 41 of the Uganda Communications Act, 2013.”