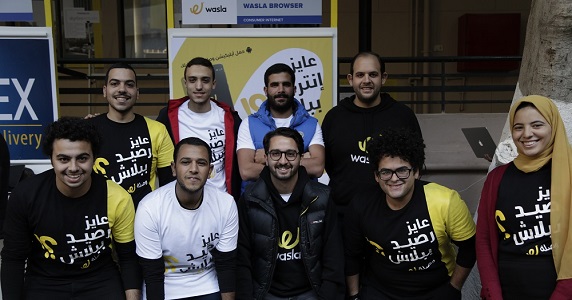 Wasla Browser, a search engine created for internet users in the Middle East and Africa, has been launched in Egypt.

Founded by Serag Meneassy, Mahmoud El Said and Taymour Sabry, the web browser which can be downloaded on Google Play Store, was introduced to the public at the 2018 Rise Up Summit, attracting over 2,000 users in under 48 hours.

The creators of Wasla Browser say they’re targeting emerging markets, with a goal of helping millions of people use the internet through mobile phones.

“We, at Wasla, are building a product that is able to facilitate this ever-increasing need to stay connected through subsidizing user mobile-data costs by leveraging digital advertising.”

Wasla’s target market comprises prepaid smartphone users between the ages of 13-40 which represents the majority of the Egyptian population.

The application is currently available for download to only the Egyptian market but the founders say they’ll soon roll out the service to other countries.

After downloading, the set-up process is not different from what you’ve experienced with other browsers like Google Chrome, Internet Explorer, Bing or Mozilla FireFox.

Wasla Browser ‘gamifies’ the user’s experience by allowing them to freely surf the internet all while completing in-app missions and actions to earn points; which are ultimately redeemable for free mobile data and airtime directly from Wasla’s very own ‘Wasla-wallet’.

Users can use Wasla like any other browser and earn reward points in the process. The browser also comes with a localized homepage in the form of a feed displaying content aggregated from over 200 sources including articles, videos and more.

“We have built a proprietary content aggregator system that matches users interests to specific content. There is also a human element to it with a dedicated content team that supervises, trains and makes sure we are adhering to our strict content guidelines,” Taymour Sabry, a co-founder at Wasla, told MENAbytes in an interview.

Wasla Browser on Wednesday announced that it had successfully secured its first round of funding ( $180,000), comprised of a group of strategic angel investors led by Omar Barakat, with funds allocated towards the launch of the beta testing phase and fueling user growth in addition to building the necessary marketing and technology infrastructure.

See: Why cost of manufacturing a smartphone will rise

The launch of Wasla Browser comes hot on the heels of a recent report by the International Communication Union, which showed that Africa had registered the highest growth in the number of internet users compared to other continents.

Of all ITU regions, the fastest growth was reported in Africa, where the percentage of people using the internet increased from 2.1 percent in 2005 to 24.4 percent in 2018.

The regions with the lowest growth rates were Europe, with 79.6 percent, and the Americas, with 69.6 percent of the population using the internet.

How to minimize data consumption when using a MiFi