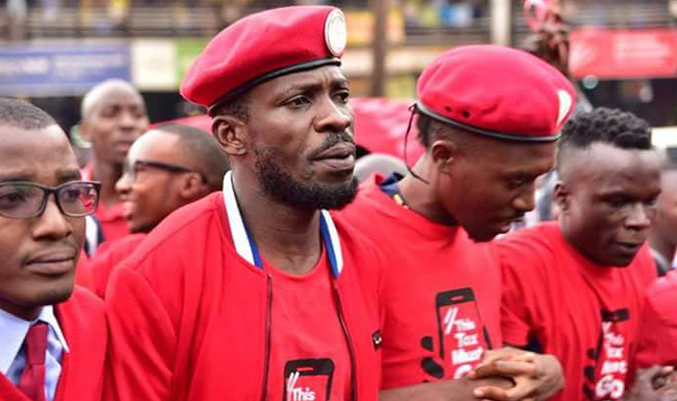 Singer and Parliamentarian Robert Kyagulanyi alias Bobi Wine has released yet another video in which he hits out at the government for delaying to remove and/or fairly charge the social media and mobile money taxes which he has been protesting from the time they were implemented.

According to Kyagulanyi, who on July 11 escaped being arrested by police which has since held his bodyguard, he says the introduction of such taxes is a sign that government no longer cares about its citizens which it’s now turning into slaves.

“We are protesting against the taxes which continue to make the citizens of Uganda slaves in their own country. We protest because we have been turned into beasts of burden,” said Kyagulanyi in the video which is 5 minutes and 45 seconds long.

“Ugandans work very hard and all the government does is to milk the last penny out of them. Instead of giving incentives to the unemployed young Ugandans to make startups like in other countries, the government is simply making life impossible.”

The representative of Kyadondo East constituency in parliament says that the protests are meant to put the government to task to account for the taxes that Ugandans pay and don’t get the services they deserve.

“… all our sweat and labor is abused. A lot of our money is either wasted or stolen. The common citizen’s effort goes to satisfy the lavish lifestyle of very few people.,” he said.

According to the legislator, the rate of unemployment is increasing and the gap between the poor and the rich is getting bigger because of such unfair policies.

“The more we are forced to pay is the more government says it does not have enough money and it keeps borrowing debts which our children and their children will have to pay…” he said.

“The citizen of this nation has been mocked enough… we cannot continue to be taken for granted, I mean, we cant continue to be taken for a ride… Who on earth came up with this ridiculous idea of taxing social media? How can they say that social media is a luxury when most of our underemployed and unemployed youth rely on social media as a source of livelihood? The government just doesn’t understand our hustle,” said Kyagulanyi.

MESSAGE TO FELLOW UGANDANS, #THISTAXMUSTGO
You can also watch the full version on our YouTube channel https://t.co/VHnXA9WGgI pic.twitter.com/ax7xM6sERc

It is important to note that government has, after multiple protests, agreed to review the said taxes and the cabinet will sit on Monday to chart a way forward. Bobi Wine has also started an online campaign against the taxes and he says more will be made against the taxes.

The government of Uganda on July 1 introduced taxes on social media, and mobile money transactions. The development has since attracted stiff resistance and criticism, prompting two statements from the president.

How you will pay your social media taxes