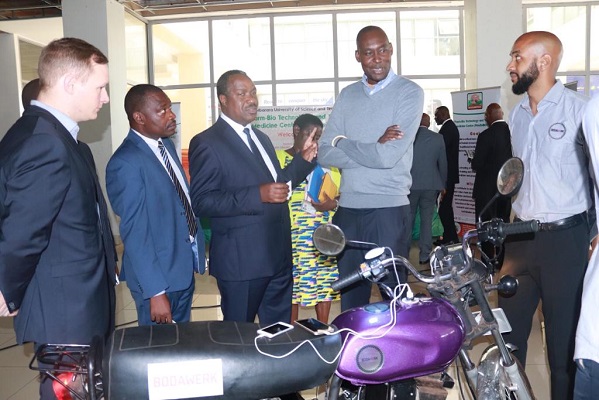 Bodawerk International was on Monday among the Ugandan tech companies that got a chance to show their innovations to Susan Desmond-Hellmann, the Chief Executive Officer of the Bill & Melinda Gates Foundation.

Hellman, who was at the Ministry of Science and Technology grounds, where he was hosted by the Minister Elioda Tumwesigye, also looked at products from Kiira Motors and Tooke, a project under Presidential Initiative on Banana Industrial Development.

Susan Desmond-Hellmann, CEO of the @gatesfoundation inspects the #KiiraEVS during her courtesy call to Hon @Dr_Elioda, Minister of @MoSTI_Ug during her ongoing visit to Uganda. pic.twitter.com/TqcXSmviIs

At the event, Bodawerk presented its electric bike, an innovation developed by converting gas engines to electric ones to help Boda riders cut costs of running a motorcycle. The system also has the potential to power other devices aside from running the bike, for instance, charging a phone, powering radio and a television set among others.

Bodawerk CEO and founder Jakob Hornbach (extreme left); Ben Lokeris Koriang, the company’s chief communications and Co-founder (in sweater); and Janos Bisasso, the chief operations officer during a discussion with the Minister of Science and Technology Elioda Tumwesigye (third from left).

When the electric bikes are finally put on the market, the company is also planning to create a model where riders will be able to swap batteries at specified locations as they await recharge.

Other products the company showcased are the Bo-Trail, which is to be used in carrying load and E-Wheely, the electric wheelchair, that is being developed to revolutionalize mobility for PWDs. The Hybriclave is a solar sterilization autoclave for rural health clinics designed in co-operation with Noor medical.

It should be recalled that Bodawerk was in April of this year awarded by Start Up Energy Transition (SET) Award 2019, a project implemented by the German Energy Agency (dena) in cooperation with the World Energy Council. This was during the SET Tech Festival on April 9 in Berlin.