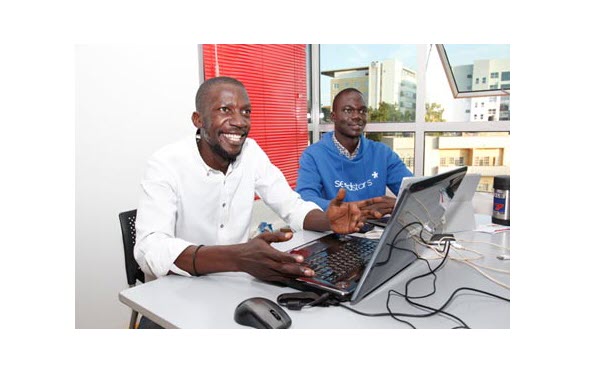 Bonny Iga Madrawi who has been the chief financial officer at Intership Uganda is now the head of operations.

The development comes after his colleague Nielsimms Sangho with whom he founded the company joined Flutterwave Uganda as country lead.

Intership Uganda is an on-demand logistics company for SMEs and individuals.

Through the platform, people can purchase goods from online stores in the United States (US), United Kingdom (UK) and China.

Maxima Nsimenta and Jeff Muze are also on the founding team of Intership Uganda.

To start the company, in 2014, the group invested Shs15m, according to Daily Monitor and by 2016 they were making a sales revenue of Shs35 million per month.

In a 2015 interview with DisruptAfrica, Sangho said that the idea to start the online shipping company came from the challenges he encountered when he tried to import computers to Uganda in 2014.

“I decided to go on a journey to figure out how to solve the logistics problem that SMEs and individuals face in Uganda and Africa at large,” he told DisruptAfrica.

Must read: In Rwanda, Flutterwave starts hiring ahead of launch

“I realized that most of the services provided in the country were either people who have their own small businesses – and that means they provide only one shipping method and ship at their own convenience to maximize profit – or shipping companies and freight forwarders, which really care for the big companies who have large volumes to ship in.”

Speaking to SautiTech, Sangho said the company which he is still part of, will be unveiling new products soon. He, however, declined to speak in details, saying he will disclose information when the time is right.

In 2015, Intership Uganda beat eleven other Ugandan startups including SafeBoda, RoundBob, and Wizarts Media to participate in the Seedstar World competition in Geneva, Switzerland.

With this company, you can shop from sites like Ebay.com, Amazon, AliExpress, Victorias Secrets, Saks Fifth Avenue, and small independent retailers like Etsy.com and they have also partnered with international couriers like DHL, FedEx, USPS and UPS.