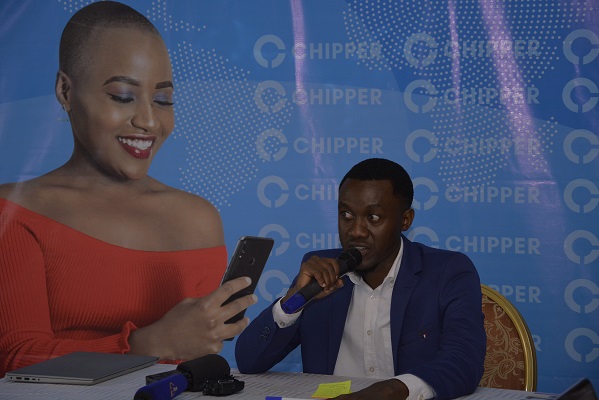 Chipper Cash, a cross-border money transfer and payments company with operations in Uganda, Ghana, Kenya, Rwanda, and Tanzania, has announced it will be adding more features to its application and web service to boost and ease mobile remittances in Africa.

The development was revealed by Ed Mugema, executive director Chipper Technologies while speaking to journalists at a press conference held at Grand Imperial Hotel in Kampala on Tuesday.

It should be recalled that Chipper Cash, founded by Ugandan entrepreneur Ham Serunjogi and his Ghanaian counterpart Maijid Moujaled, recently raised $2.4 million (about Shs9 billion) seed round.

The duo met while students at Grinnell College before parting shortly to have stints at Facebook for Serunjogi and Flickr, Yahoo!, and Imgur for Moujaled.

They later reunited to create the cross-border money transfer service and it went live in October 2018. Using Chipper Cash, you can transfer money to anyone in Africa at no fee.

Asked how they are able to run a company that’s offering a free service, Mugema said: “you [the user] shouldn’t worry about that… the first and most important thing is that we provide quality services for free”.

He believes that once their users are satisfied and happy with the service, it’ll then be easier to monetize the platform.

After raising the recent seed round, which was also backed by Joe Montana, a legendary American footballer, the company announced plans to roll out Chipper Checkout, a merchant focused, C2B, mobile payments product where the users will be charged.

With more than 70,000 users currently using the service, Mugema says “our goal is to connect Africa to the rest of the world in terms of financial transactions.”

One of the key things that inspired the creation of Chipper Cash, according to Serujongi, it was the observation that it’s become difficult to establish merchant-focused products like PayPal because of the fragmented nature of Africa: different cultures, currencies, and markets.

“America is one country, Europe has a common currency, China and India have over one billion people each, but Africa is 54 different currencies, cultures, and markets,” he told VentureBurn recently.

“This makes it incredibly difficult to navigate this vastly diverse continent and requires us to re-think all assumptions we have about what’s worked elsewhere.”

With Chipper Cash, you can transfer money in any currency without having to convert it.

The application currently has four main features. One is ‘Activity’ where you can monitor all the transactions you’ve made. The other is ‘Pay’ which you click to access numbers you want to send money to.

There is ‘Earn’, which you will use to participate in Chipper Cash’s referral program and get rewarded.

The other sections under ‘Profile’ are Share Tag, also used in referring the app; Linked Accounts, so you can use different mobile money accounts to withdraw and top up your Chipper Cash wallet.

There is also ‘Settings’ used in managing your app, Chat with Team, for customer services and Set up PIN (I don’t need to talk about this).

The application is available on both Play Store and App Store and the process to launch it is basic, i.e. after downloading it, you’ll open it, enter your mobile number to get an access code and from here, you’ll be able to access all the features named above.

Meanwhile, Chipper Cash has also revealed plans to expand to more African countries though it did not reveal which ones.