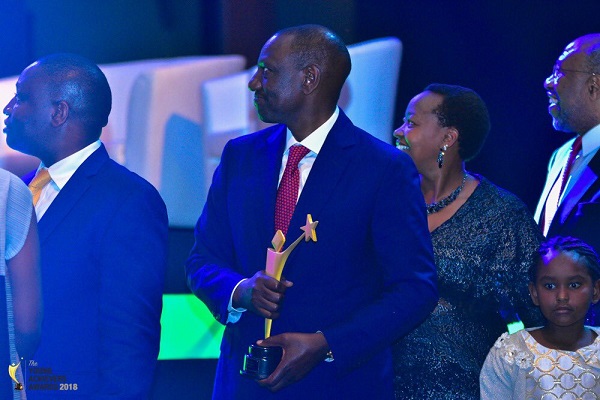 It was a glamorous and merrymaking Saturday evening as hundreds gathered at the Kampala Serena Hotel to witness the rewarding of people who have done special things in different fields, including Arts, Entrepreneurship, Media and Journalism, Philanthropy, Innovation, and Sports.

This was another edition of The Young Achievers Awards, a project that was rolled out in 2009 by two entrepreneurs Awel Uwihanganye, and Ivan Serwano Kyambadde to “recognize and celebrate outstanding youth in the Ugandan Community that have excelled in” some of the aforementioned sectors and whose works are contributing to the change of society or are hoped to.

The event was graced by Kenya’s Deputy President William Ruto, who was accompanied by some members of his family and other leaders from Kenya. Ruto received the Lifetime Achievement award at the ceremony.

At the event, President Yoweri Museveni, who was supposed to be the guest of honor, was represented by the Prime Minister Dr. Ruhakana Rugunda. Ministers Amelia Kyambadde (Trade and Industry), David Bahati (junior Finance) and Florence Nakiwala (Youth and Children Affairs) also graced the event.

45 people had been nominated in nine categories. In each category, only one person got the gong. There were other special awards that were given out like the Star Hall Fame award that was taken by Betty Bigombe, a former Ugandan minister now working with the World Bank, the Hero award was taken by Patricia Okwiny Joyce, who is supporting people with disabilities and Phyllis Kyomuhendo was announced as the overall achiever of the year.

Below are the other winners