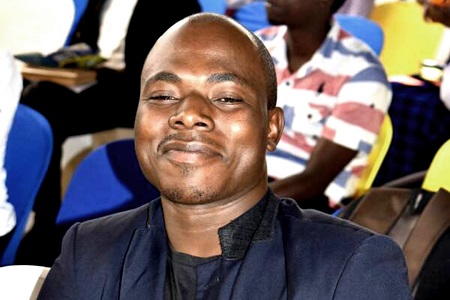 Cosmas Ndugga, the founder of The Cosmas Foundation Uganda, a non-profit organization, is the winner of the US $500 grant put up by Startit360, an annual workshop organized to nurture entrepreneurs in Uganda.

Ndugga started The Cosmas Foundation to support the underserved communities in the country through a number of development projects, including Agriculture, community health programmes, business mentorship among others.

Cosmas Ndugga, who graduated with a Bachelor’s Degree in Business Administration/Marketing from St. Lawrence University, has also worked in the real estate and construction sector.

According to the organizers of Startit360 — The Growth Office and Hangout Foundation – the grant will be used to support The Cosmas Foundation in promoting their digital brand through improving the current state of the website, web hosting, digital marketing among others.

Meet Ndugga Cosmas, winner of our #Startit360 grant. Founder, https://t.co/43zVpKFRiY. We will be offering support to his initiative; building/redesigning his website, free web hosting, branding and free consultation to help him redesign his venture in the coming 12 months. pic.twitter.com/gJT9Fqkejb

Cosmas Ndugga competed alongside 6 other entrepreneurs at an event held at Forever Resort in Jinja on December 8, 2018.

The event was graced by Paul Mwirigi, a public relations director at TBWA Uganda.

Speaking about Ndugga’s win, Joshua Daaki, the founder Hangout Foundation, said: “We were very impressed with his work and we believe that he has what it takes to grow ideas and create more jobs for young people. Every year, we want to support young people like Cosmas with the tools we have developed and with our network.”

On his part, Ndugga said: “Through my education life, I was helped by many people; not only my parents, but also other family members who supported by paying my school fees and other requirement. I know that there are many young people out there whose situation is worse than mine, and I want to look for ways of correcting the imbalances with in the young people who we face similar problems or worse than mine.”

Bitature on securing investment for a prototype, rising after failure