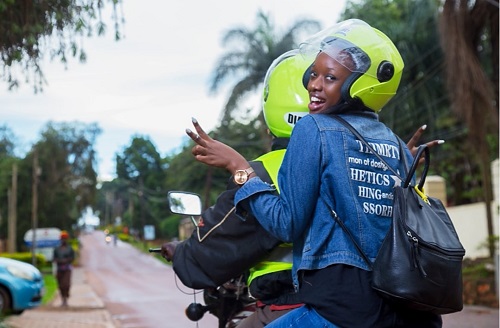 On 20th of June this year, Dial Jack launched in Kampala.

Just as any other technology company establishing itself in a new market, the startup introduced a number of novel ideas to win both boda riders and customers.

Dial Jack, for instance, introduced a feature codenamed Hail Button, which can be used by passengers who don’t own smartphones.

No ride-hailing company in Uganda has replicated that up to now.

According to Jacob Mathew, the founder and CEO of Dial Jack, this feature is only being used by Grab, a Singapore-based ride-hailing company.

With the Hail Button, when you stop a boda-boda, the rider will ask for your phone number which is then fed into the Dial Jack system so that the control center can be able to estimate the transport costs.

According to Mathew, who I met recently for an interview, Dial Jack Technology Pvt Ltd is focusing on product differentiation.

“We’re differentiators in the marketing,” he told me, adding that they want produce technology products and programs that can’t be replicated by any other company they’re competing with, in a particular market.

For instance, Dial Jack was the first company to roll out an SOS button on their application in the Ugandan market.

But in their recent announcement of what Uber called a ‘Safety Toolkit’, the company listed an emergency button among the features that would be rolled out this year.

Another crack that Dial Jack felt required plugging when it came to the Ugandan market was insurance.

Uber and SafeBoda have since unveiled insurance packages for their riders and drivers.

In fact, Mathew is so impressed by their growth rate, he told me: “We’re doing well, I can’t complain; for a four-months-old company … we’re doing very, very well.”

He added: “And our unique and our biggest strength will be the differentiation of the market, and I don’t think anybody will be able to catch up…”

Dial Jack in four months has registered close to 300 boda riders, according to Mathew.

Being based in the Industrial Area (Bugolobi), most of their first recruits were around that area. So, when in Industrial Area, you can easily get a Dial Jack.

They also have a good presence in the Kampala city center, and Mathew told me it is also a main area of interest as they seek to expand to more areas and suburbs around Kampala.

To attract customers, Dial Jack is also doing a number of promotions and marketing campaigns.

For instance, when you use the app for the first time, you’re given two free riders to any destination daily for a month.

They also have a feature that allows you to book rides. When you use it, you’re given a 50% discount off every ride.

Other hailers are given 25% discounts.

Other companies like Uber offer 50% discounts for Boda rides and 25% for cabs, SafeBoda gives a discount of 25% when you use the credit payment option.

Just as Uber and Taxify, Dial Jack takes 15% off every amount a rider makes.

Dial Jack has also ramped up its marketing strategies by introducing billboards, hired an agency for social media marketing and guerilla marketing techniques.

At the launch, when I interviewed Patricia Nakato for our first feature on the company, she told us they had plans of introducing more services like Dial Food, Dial Doctor, Dial Car.

In the recent interview I had with Mathew, he assured me they’re still working on those projects. He even told me they are planning delivery drones and venturing into blockchain and introduce their own digital currency.

He also said they want to introduce mobile wallets. They currently rely on the mobile money system of telecommunications companies.

In the near future, the company will also expand to other African markets.

Mathew who called Uganda “a land of opportunity” when I asked him why he left New Zealand to establish a company in an East African nation, has also realized that the people he’s working with, especially Boda riders, are focusing only on the short-term.

“Uganda is a very challenging community,” he said, adding that most people are always trying to find a way to quickly benefit from a given venture, without patiently focusing on building something that will last for generations.

“Some bodas don’t have a long-term vision… they’re looking at beating the system,” he went on. “It takes a little bit of effort and time to change the community, that’s the biggest challenge in this market.”

But he also believes that “this is an ecosystem that if nurtured well will sustain and grow by itself.”

Dial Jack is still self-funded and he told me they are talking to investors to get “our first round of Series A funding.

As we concluded our interview, he acknowledged that despite their current reasonable growth rate, as a company (Dial Jack), “there is miles and miles of scope for improvement.”