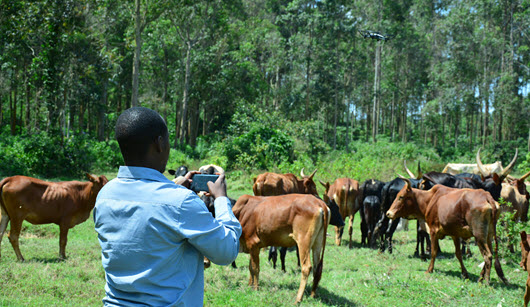 Ronald Katamba, the creator of the Jaguza Livestock App, wants to initiate the use of drone technology in livestock farming in Uganda.

Jaguza Livestock App is a software developed to help farmers track their animals so that they can get real-time data on their locations and health.

This past Friday, at the farm of Mzee Lameck Kasozi in Kasenyi, Entebbe, Katamba demonstrated how drones can help livestock farmers reduce expenses on farm management and the time they put into monitoring their animals and property.

By and large, in livestock farming, drones are used by farmers to monitor livestock movements, water, and pasture on the farm and fence conditions across the ranch, especially in areas that are difficult to access.

Bigger drones can carry thermal cameras that detect heat and a farmer can know, using the animal’s temperature, whether it is falling sick.

Bigger drones can also help in transporting materials to the farm.

Now, Katamba, to make monitoring using drone technology in livestocking farming more modern, he has invented a chip, an RFID tag, put on a cow’s ear so that using a drone, a farmer can count his cows or locate them when they hide or are being stolen.

This can also help farmers monitor sick animals or those that are almost giving birth.

Previously, farmers have been using hand-held devices to verify that all their cows are present as they enter the kraal in the evening, which was tiresome and time-consuming.

Joshua Akandwanaho, the owner of Frank Farm Estates Ltd in Ssembabule, where he keeps hundreds of cows, was quick to embrace the idea of drone technology in cattle monitoring.

Also an official with the National Information and Technology Authority, Akandwanaho says using drones, it would be easier for farmers with large farms to track their animals than the traditional methods that are currently being applied. (He was also at the demo in Entebbe on Friday.)

His concern was whether they can be priced to be afforded by most large scales.

Our #JaguzaLivestockApp IoT consists of web enabled devices that collect, send and act on data they acquire from the surrounding environments and Livestock using embedded sensors, processors and can sometimes talk to other related devices and act on the information they get. pic.twitter.com/evDrE75r3o

As demonstrated above, if costed at a price relatable to farmers, applying drone technology in livestock farming would be a gamechanger.

However, Uganda is yet to set rules and regulations for using drones in the country.

In fact, authorities have been impounding all imports of drones into the country, though some private people have managed to sneak them into the country and use them mainly for photography.

The problem of drone regulation, however, is not only in Uganda; many African countries do not have any laws that govern how the sector can be managed.

Kenya’s efforts to put in place the necessary laws suffered a setback in July when Parliament refused to endorse the Remotely Piloted Aircraft Systems Regulations 2017, citing safety and privacy concerns.

It’s only about 14 countries in Africa, including Rwanda and South Africa, that govern drone regulations.

But even with some regulations set by some countries, the prevailing conditions are really synonymous with unfair.

Currently, many African countries, to obtain a permit for a drone service, you need to deal with multiple government bodies, at significant expense, with no ultimate certainty you will be granted your permit.

Besides, the lack of harmonization of drone regulations across African countries also poses a challenge.

For instance, in South Africa, the regulations consider that using an Unnamed Aerial Vehicle (UAV) for agricultural data-generation means that UAS (unnamed Aerial Systems) are used commercially and should be governed in the same manner as commercial manned aircraft.

This requires the operator to comply with a number of key steps, including, but not limited to (a) obtaining a remote pilot license, b) registering the aircraft.

You also need to obtain an air service license (ASL) from the Department of Transport and a remote operator’s certificate (ROC) from the South African Civil Aviation Authority.

In Nigeria, in May 2016, the government banned the unlicensed use of UAVs and stipulated guidelines for drone operators in Nigeria.

They also require operators to command a minimum share capital of N20 million (US$55,600) obtain security clearance from the National Security Agency and submit a request for authorization to fly at least 6 months prior to intended drone use.

“A single person cannot comply with all the requirements, as these require a number of positions to be filled, such as quality assurance manager, flight operations manager, safety officer, and security officer, amongst others,” says Theophilus E Mlaki, an expert in drone technology in Kenya.

“The total cost to comply with the regulations exceeds $38,700) and takes over two years to complete,” he adds.

“Small drones are unmistakably different from aircraft in so many ways, yet they are considered as fully-fledged aircraft in most countries, which is perhaps the primary challenge impacting their governance.”

As he pursues his project of rolling out the drone technology in livestock farming, Ronald Katamba and his team are already struggling with getting approval from authorities to proceed.

He says he has already written letters to the ministries of Defence and Agriculture and he is awaiting their response.

In the face of these challenges, innovators have been advised to always involve governments in their projects at an early stage to create enough room for policy formulation.

According to Sylvester Kayondo, a civil aviation expert and lawyer, many technology developers do not involve government at the initial stage of designing these technologies, which becomes a challenge when it comes to putting in place laws that govern them.

“The challenge we face when developing technologies in many countries in Africa is that we do not involve governments at early stages,” he says.

“We assume that most government bureaucrats will understand and absorb our technologies as soon as they are released. It takes time for governments to internalize technologies,” he adds.

“What we should do is to engage governments and their relevant departments, at early stages of technology development and trial, impressing upon their potentials in socioeconomic development.”

It will take time

Ademola Ade, an expert within aerodrome technology at the UN, adds: “Policy changes to regulations usually take time and therefore don’t usually happen as fast as clicking a button to buy or fly a drone.

“So, till we can get such decision making to happen as fast as Tech innovations we may always have a challenge with tech-related policy and the government adaptiveness to new technologies.”

Despite the current challenges, there is no doubt that the roles drones have to play in transforming different sectors are indisputable.

A report by the Association for Unmanned Vehicle Systems International in 2015 predicts that the legalization of commercial drones will create more than $80 billion in economic impact (such as revenue, job creation) between 2015 and 2025 and that precision agriculture will provide the biggest piece of that growth.

In Uganda, farmers in western Uganda have already used drones in tea farming and they have talked of profound results.

In Rwanda, the drones are helping to transform the health care system by delivering blood to remote hospitals.

Regular flights are organized over the port to ensure contractors meet their deadlines.

Some experts are even eyeing a full automation. In the distant future, they envision autonomous flights, tracking  and object avoiding technologies that will enable the drones to herd the cattle and the sheep autonomously, e.g. without a human control.