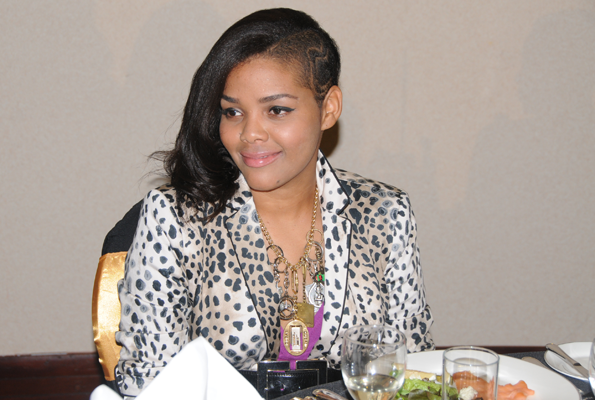 You might not know Gloria Wavamunno, but if you love entrepreneurship, the name Wavamunno must ring a bell. Gloria is the daughter of Gordon Wavamunno, the multimillionaire behind one of Uganda’s legendary brands Spear Motors Limited, the official distributor of notable automobiles in Mercedes Benz, Jeep, Dodge, Chrysler, et cetera.

While most people go through life without a clear ambition or spoilt for choice thus having trouble deciding on what to focus on and give it their best, for Gloria Wavamunno, she knew by age of ten that she wanted to be part of the creative industry.

Born in 1985 and raised in a family of eight siblings, Gloria spent most of her formative years around her mum and aunts who were involved in the tailoring business.

As she observed them at work, she started picking interest in the art and decided to begin designing stuff as a pastime, according to her 2017 interview with Crystal Newman.

“As I grew older, of course, I liked to design for my friends, but it was just for fun,” she told Newman, adding that when she was sixteen, one of her teachers saw her work and encouraged her: “… but you could be a designer.”

From there on, Gloria says in the interview, her teacher’s words inspired her to start researching about the fashion design industry.

“… I was like, oh, maybe this can be a more solid career than a painter…”

During the research phase, Gloria Wavamunno discovered that she could do better doing both designing and tailoring. The fact that her aunts were doing well in the tailoring industry gave that thought more impetus.

“… luckily I still do tailoring… people come to me for tailoring coz [sic] they want my aesthetic in it rather than just saying, hey, this is the dress I want, so, I think I’ve evolved to become this tailor whose aesthetic is appreciated so people allow me to design their pieces as well as making ready-to-wear,” she told Newman.

In 2009, Gloria, then 24, completed her fashion design and marketing undergraduate program at the American Intercontinental University in London. To celebrate her graduation, she told Agnes Nantaba of The Independent Magazine in 2016, she held a fashion show at her home.

“Many people do graduation parties but I chose a fashion show for people to know that I was starting out to be a designer,” she said, according to Nantaba.

And that’s how Kampala Fashion Week, Uganda’s preeminent fashion event, was born. The gala, which was started to promote Ugandan fashion designers to a large global market, has since been featured in international publications like Vogue Italy, Arise Magazine, Flare and African Woman Magazine.

Gloria, who also started Uganda Fashion Council to further propel her vision, has also created costumes for some musicians, including Navio and designed clothes for Nokia Face of Africa. She also owns Gloria Wavamunno Fashion Studio through which has trained a number of aspiring fashionistas.

Learning from the best

Knowing that idea was new to the country she was going to develop it from, while at university and a little after, Gloria spent most of her time gleaning all the knowledge and information she could. This was done by working with fashion designers in the United Kingdom and trying out different things. For instance, she worked as a hairstylist, a makeup artist, a hairdresser, etc.

“I wanted to gain as much insider information,” she told Newman. “… I understood the newness… what it would be in Kampala, so I was just like if I know everything and I just learn it, then when I come back, I get on the ground, at least this experience will support me, which it did.”

Even wealthy people have a conscience. Just because your parents have all the money in the world doesn’t mean that when they support you with seed money and you misuse it, life will go on normally.

It will haunt you because you’ll start looking like a loser, someone without focus and you’ll be justifying the derogatory notion that rich kids are spoilt.

“… financial challenges were always like a big pressure coz [sic] you know when you’ve some form of debt… and nothing is coming in, you are a bit stressed about that you are thinking of your livelihood and living and how you are going to manage that,” she says in the interview with Crystal Newman. “I was very hard on myself and I think that’s not okay.”

For Gloria Wavamunno, the emotional support she got from her parents was more crucial than the finances. When Newman asked her whether her dad supportive, she responded, “Yeah,” adding: “I think they are concerned and they are worried, and you know, sometimes also the society as much as you have parents who are seeing, understanding the evolution of people and women, especially because I’m not a boy, if I was (sic) a boy, maybe some things they would never have been worried about because that’s the world we would have been knowing.”

Goes on Gloria: “But I’m a girl, so they had to take all those things into consideration. I’m just happy that my parent’s coz [sic] of being who they’re and believing their viewpoints on people and things like as much as I said I wanna do this, my father is like, okay, then go do it. Like, let me see, like, I am not gonna get in your way; either succeed or you fail. And I feel like, yeah, that’s much more realistic… I think emotional support is so much important even though sometimes people assume that financial support is always what people get and that’s how they get successful.”

Additionally, she affirms: “And I know that I’m here because of the emotional support. Because, this industry, people in general, it’s very complicated, especially when you are working with artistes, who are like, very sensitive.

“… and I think being as solid as I could be as a kid… coz[sic] parents can’t also protect you from whom you gonna meet and who’s gonna try and influence you.”