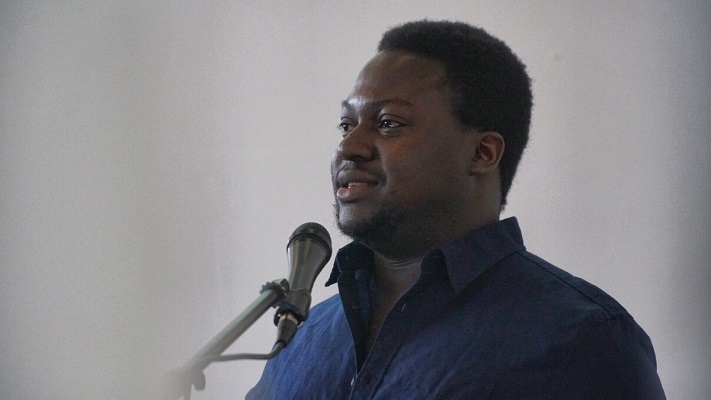 The funder is none other than Joe Montana, the American Football legend, who played 16 seasons in the NFL as a quarterback.

In 1990 Joe Montana was named Sportsman of the year by Sports Illustrated Magazine, and in 2000 (his first year of eligibility) he was inducted into the Football Hall of Fame.

Ham Serunjogi is no stranger to wins. As a pupil at Aga Khan Primary School, he consistently finished top of his class in academics.

At the same time, he was representing the country in swimming competitions. His name was a regular fixture in the sports pages of newspapers. Some of his team-mates, like Jamila Lunkuse (herself an Aga Khan alumnus), went on to represent Uganda at the Olympics.

However, Ham had found a new love.

Unsurprisingly, Ham joined a top US university for his undergrad degree, Grinnell College in Iowa. It was here that he first met Maijid Moujaled from Ghana. They would go on to found Chipper Cash together, a few years after they graduated.

Immediately after graduation, Ham Serunjogi scooped up a job with Facebook, becoming the second of his siblings to join a Fortune 500 company, after his big brother Tefiro, who plies his trade at Mastercard.

His friend Majid was also working in Silicon Valley, at Flickr, the image and video hosting service. He also worked at Yahoo! And Imgur.

Ham turned his back to the promised career that Facebook inevitably offers, quitting and instead opting to take the uncertain path of building a startup.

His Facebook colleagues didn’t even try to stop the man– on– a– mission. “My team (at Facebook) was quite supportive when I made the decision to leave. I still have a lot of friends (at Facebook) and I catch up with them every once in a while.”

The hard work was about to begin. Potential funders didn’t seem to be as convinced as his former colleagues. “So many pitches didn’t go well– more than I can remember. I think it is part of every entrepreneur’s journey to get more “Nos” than “Yes’s,” he admits.

In a YouTube video, one can see Ham delivering a spirited pitch.

“With Chipper, we’ve built the first platform of its kind to process completely free and instant cross– border money transactions”, he submits.

The company offers free cross border mobile money payments in Africa. It’s registered in San Francisco and has offices in Kenya and in Ghana. Chipper Cash has racked up 250,000 transactions and boasts over 70,000 users, according to Ham Serunjogi.

It’s no wonder therefore that investors started lining up, to offer funding. “In the end, we had a lot more investors than we could take on. This is usually referred to as having an oversubscribed round. It is a good problem to have,” he shares.

How did he meet Joe Montana? “Joe Montana’s team actually reached out to me and requested a meeting,” he responds. Ham then had an initial meeting with one of Joe’s associates and then a second meeting with Joe himself, and some partners from his fund. Ham told tech magazine TechCrunch, that “Joe was quite excited about what we’re doing and he believes that the next wave of tech growth will come from Africa”.

Ham is quick to clarify to me that Joe isn’t Chipper’s only investor, “or largest for that matter”.

Must read: These 6 signs indicate your startup is destined for booming success

He cites Deciens Capital as Chipper’s largest investor. Other investors include One Was Ventures, Brue2 Ventures and 500 Startups. He has also stated that working with Joe is in itself a blessing. “Having access to somebody with the leadership qualities of Joe, to provide advice and guidance– that’s something that’s priceless”.

Within the next 12 months, Chipper will expand beyond its current operations in Uganda, Tanzania, Kenya, Rwanda and Ghana. “(The African Market) is so large that it is unlikely to be a zero-sum game, in terms of who wins. There will be multiple successful players.”

With the anxiety of such huge dreams, and then afterward with the pressure of managing such huge sums of money, one must be able to continue believing in themselves, no matter what, in order to survive.

I ask Ham whether he ever second guesses himself. His response reads like a paragraph from a motivational author’s best seller.

“Absolutely, I think it is a signature part of every entrepreneur’s journey to have moments of self-doubt. Very often lots of things go wrong before one thing goes right and what I’ve found to be true is that with most entrepreneurs that end up being successful, it is usually a result of perseverance and sheer refusal to give up, more than anything else.”

Seed round: How much money should I raise?

How to get an investor’s attention