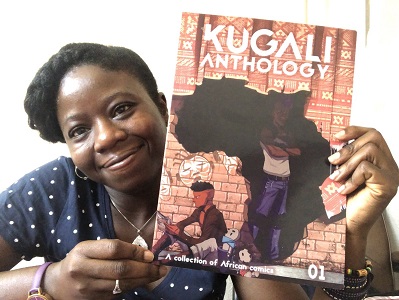 The trio is based in London.

These stories are told in books and animations. They’ve also leveraged the latest technologies like Augmented Reality, XR, AR, 3D to create material that’s attracted both the young and old audiences.

In a recent interview with BBC TV, the trio told the British broadcaster that they’re “going to kick Disney’s ass in Africa!”

Fed up of non-Africans telling African stories, three friends from Nigeria and Uganda decided to create @Kugalimedia, their own comic book anthology. pic.twitter.com/rQSrb68cvd

164-208 pages, 3 or 4 comics per book, 20+ creators across multiple African nations & the diaspora. An all-ages collection and a collection for mature audiences. The best collection of African comics money can buy! Order at https://t.co/hT2eRYJwuE. We have digital versions too pic.twitter.com/l85m9XH8ZH

Speaking to BBC, Ziki Nelson said that for the past several years, science fiction genre has not given enough space to black actors, which sort of came across as if there were no blacks in the future.

At Kugali Media, they want to ensure that Africa is also represented in futuristic storytelling.

Their books and videos are available on their website and the video below explains how you can get their content.

The group has ventured into the industry when African-based storytelling is increasingly attracting global attention.

In Kintu, Makumbi combines Ugandan folklore and mythology with biblical legends to deliver an astounding story.

Kugali Media has already raised US$25000 through crowdfunding from across the globe.