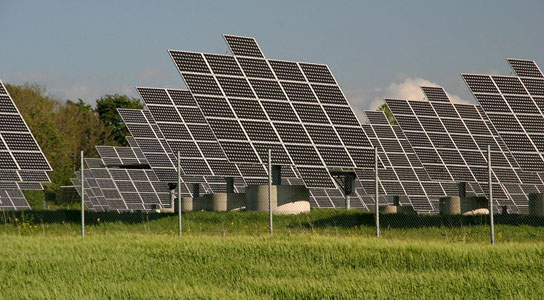 A startup in Africa is testing a hypothesis. Can cheap solar panels and batteries do for electricity what mobile phones did for communication?

Today, mobile phone subscriptions are more common than grid connections in Sub-Saharan Africa. About 700 million people in the region have a mobile phone, while only 450 million have access to reliable electricity.

That’s because wireless telecommunication companies allowed countries to skip over 19th-century architecture to 21st-century cellular towers and cheap handsets. Now energy startups like Bboxx, d.light and Niwa are betting they can do that for electricity.

Mansoor Hamayun, one of three co-founders at Bboxx, said he started the company in 2010 because about 1.2 billion people around the world still lacked access to reliable electricity and plans to change that would take decades. Bboxx claims it will deliver electricity to 20 million people by 2020, and it’s only getting started. “Africa has a history of leapfrogging,” says Hamayun. “[Although] it will take longer to for everyone to get power than a phone, Africa absorbs innovation so quickly because it’s desperate for it.”

Bboxx is effectively an energy utility. In a world used to government-run or -regulated agencies that build out cables, wires, and power plants, a new distributed model is evolving.  In rural areas with little or no infrastructure, Bboxx uses pay-as-you go mobile payments and cellular connections to install cheap batteries and solar panels on buildings without selling any equipment. Customers buy electrification packages.

Only a few US dollars per month is enough to lease solar panels, batteries, and high-efficiency appliances. Local installers wire up the buildings.

Must read: How Taxido wants to dominate the Ugandan ride-hail industry

A remote cellular connection (2G or an SMS backup connectivity) turns the system on or off based on payments, not unlike a cellular package. Taxi drivers may pay daily, while farmers can pre-pay months ahead after a good harvest.

Bboxx’s advantage is that it is designed to work at almost any size. Utilities demand a minimum number of well-off customers to justify connecting individual settlements. With distributed, connected infrastructure, systems can be fitted to almost any customers’ needs and ability to pay.

A cheap option may power a few light bulbs, a radio, and a flashlight, while a higher-end $80 per month package may energize a fridge, radio, TV, and laptop. Customers with high-demand appliances such as freezers or irons can still connect to the grid and use Bboxx for smaller loads.

Because many customers may be getting electricity for the first time, Bboxx leases its own branded appliances that are five to 10 times more energy efficient than the standard, the company claims.

Collecting all of this potential data on customers has unlocked new financing from institutional investors who have never entered this space, as well as the UN (paywall) and crowdfunding platforms (Bboxx forecasts 5% returns over 36 months). Even telecom companies are positioning themselves to become purveyors of “essential services” like electricity. Orange Energie, for example, is selling solar kits across Africa.

That’s convinced countries to shift their rural-electrification efforts from public to private infrastructure. The Democratic Republic of Congo struck a deal with Bbboxx this year to supply power to 2.5 million of its off-grid citizens by 2020, while Togo has contracted for as many as 300,000 solar home systems by 2022.

The cost of the solar-plus-battery systems is only getting cheaper (component prices have fallen more than 70% since 2010). Once the cost drops below that of stringing new transmission lines, the old grid model may begin to fade.

Homes and businesses can generate and store much of their own power. Microgrids will share and store power among customers rather a hub-and-spoke model dispatching electricity from large power plants. The grid will repurpose itself to ensure reliability and aid transmission, as solar and battery account for most daily consumption (also known as partial-grid defection).

A competitive market to generate one’s own electricity has never existed as a real alternative to the grid. Now it’s everywhere.

In relatively affluent countries, companies like Sunrun and Sunova are installing home solar and storage systems from the US to Europe as falling prices have made them cost-competitive or cheaper than grid electricity while improving reliability. For the 1.1 billion poor still without electricity, Africa is leading the way.

Inside govt plan to create one centralized IT data point