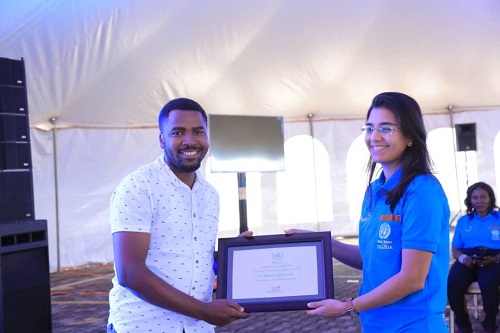 Humphrey Nabimanya, the founder and team leader at Reach A Hand Uganda has received a certification of recognition from United Nations Uganda.

Much thanks @UNinUganda for recognizing me & my team at @reachahand for our contributions to youth empowerment in Uganda 🇺🇬 thank you for giving us a platform to empower our peers through @UNFPAUganda, @UNESCO, @UNAIDS_UG & @UNDPUganda #UNisUS #UNDay pic.twitter.com/i2iaeXS3Ax

Reach A Hand- Uganda is a youth-centered non-profit organization focusing on youth empowerment programmes with an emphasis on livelihoods and skills development, behavior change communication, sexual reproductive and HIV/AIDS awareness and prevention.

Through Reach A Hand, Humphrey has helped hundreds of thousands of youths in Uganda learn and discover a ton of stuff about Sexual Reproductive Health and Rights.

The organization recently launched an electronic consultation platform that enables the seamless transfer of patient information from a primary to a secondary treating practitioner’s client management system.

Also a television presenter, Humphrey Nabimanya was in September of this year listed among 100 most influential young Africans.

A graduate of community psychology, he also previously been awarded and recognized by other powerful organizations like Nambi Children’s Initiative in 2012, MTV Base Africa Leadership Award and Youth Advocate by Public Health Awards 2014.