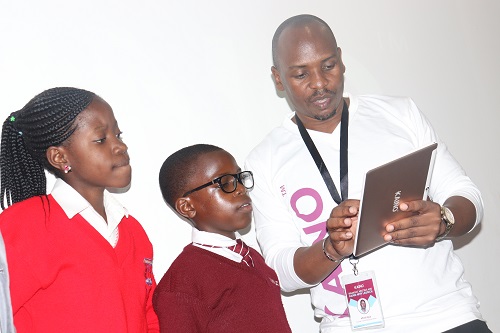 “The conventional way has never changed the world,” Alfred Opio, the chief executive officer of KAINO Africa, said Tuesday morning as the company rolled out its products at an event held at Skyz Hotel in Naguru, Kampala.

Also known as KAINO, the startup is an education technology (EdTech) company focusing on increasing student-teacher contact hours, which will be achieved by providing “low-cost, high quality primary and secondary academic content.”

Teacher attendance in schools has become a serious problem in Uganda; in 2017, the government through the Prime Minister’s office was prompted to institute a team led by the Professor Ezra Suruma to monitor and enforce sanctions and rewards to drive improved teacher attendance.

While there has been an improvement, according to a recent report, there are still multiple reasons teachers miss school and which reasons can’t be addressed by enforcing unrealistic rules. Even if it was to achieve maximum efficiency, it requires more capital in terms of human resource to manage it.

The products that were unveiled by Kaino Africa on Tuesday seek to address such challenges in the education system. (The products were released at MVP level, implying that they have sufficient features to satisfy early adopters but complete set of features will be included after considering feedback from the initial users.)

KAINO Africais trying to streamline the education system by bridging the gap in the prevailing disparities among rural and urban schools in Africa using three platforms; a web-based service, a mobile application and a tablet: KAINOtab.

The key areas they are focusing on are enabling teachers to improve curriculum management and lesson planning, connect learners in rural areas to teachers in the best schools in the country, improve assessment methods, cut on costs of the education system that always sees a larger percentage of learners not progress to higher levels.

The Android-powered tablet is designed for use by parents, teachers, and learners. On the tab, there is a complete Content Management System that includes curriculum aligned lesson guides, lesson notes, learner’s workbooks, textbooks, assessment tests and a fully integrated Student Information System to support intelligent data-driven decisions.

The platform facilitates cost-effective administration as schools’ administrators are able to monitor teacher classroom attendance, register students and monitor visitors who check on students during the term so as to improve the security of learners. Parents, using this system, can also assess how teachers are training their children. A self-assessment provision is also available to teachers and learners.

The above features can also be accessed using the app and the website. The tablet is just customized for education use. Which is why they have eliminated access to sites that will distract a learner.

To achieve their target, KAINO has established partnerships with different players in the education sector. For instance, in Uganda, they are working with Teachers in Need to train teachers on how to use the system, Sipro education services Ltd and a number of Ugandan publishers to provide books at very affordable prices.

The company is currently working with four schools which are located in Arua, Tororo, Kawempe, and Matugga. The textbooks on the KAINO platforms can be accessed at a price 10 times less than the market price, according to Cedric Namakora, the chief administrative officer at KAINO.

In a press conference, he said that they are mainly focusing on reaching rural schools since they have been the most underserved.

“We’re targeting mainly villages because they are the most affected,” said Namakoro. “We hope and believe that, with this technology, the level of education is going to improve.”

To attract schools to their service, the KAINO team will traverse across the country introducing the platforms to them. When a school buys the idea, each student will be paying a dollar per month for rural schools and thrice that for urban schools, to access a tablet. Teachers will get them at no cost.

To solve the problem of high data charges, Opio revealed that they were currently in talks with telecommunication companies so that the end user doesn’t have to incur data costs.

"The goal is to be at the forefront of digital product dev't & innovation of educational resources in Africa; a continent which requires innovation on a go forward basis to prepare especially the next generation for the mobile, cloud versed world…" Alfred Opio CEO @KAINOafrica pic.twitter.com/2665ihS5kB

According to Namakora, they hope to expand to all East African countries in 12 months and the whole continent in three years. The app can be downloaded by using either an iOS or Android powered phone. (You, however, can’t use it without official permission.)

Inside govt plan to create one centralized IT data point