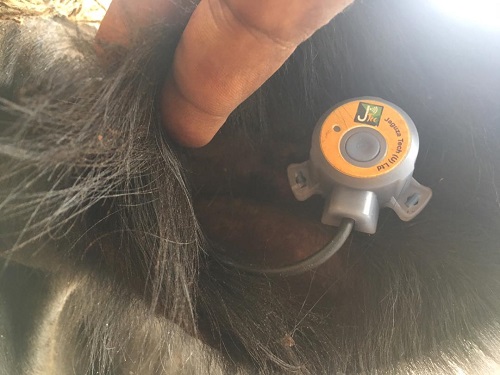 Afrosoft IT Solutions the developers of Jaguza Livestock App have added more features to the application and with prospective and already-secured partnerships — Jaguza could soon be a tool that will solve problems of multiple farmers across the continent.

Late this past September up to the early days of this October, Ronald Katamba, the founder and CEO of Afrosoft was in China, where most of the devices that are synced to the Jaguza Livestock App are manufactured.

While in China, Katamba visited different companies and institutions, including the University of Hong Kong and the China Innovation Center, where he interacted with academicians, developers, researchers and investors in emerging technologies like blockchain and the Internet of Things (IoT).

On Tuesday, Ronald Katamba invited a group of journalists and social media influencers to witness the performance of the new developments in the Jaguza Livestock App as they were tested at a farm in Kasenyi, Entebbe.

Dominic Ferguson, the managing director of Consult IT, a Botswana firm that specializes in livestock IT services, represented the European Union at the event. 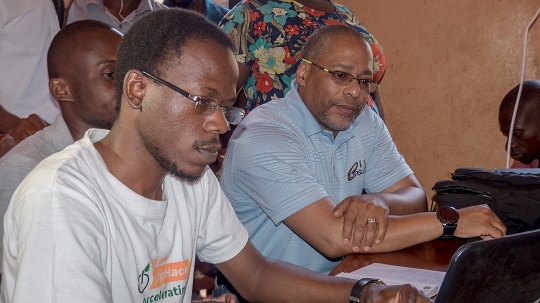 Dominic Ferguson from Consult IT (wearing a blue tee) with Charles Kalungi from Jaguza. Kalungi was showing Ferguson how the Jaguza system works

The European Union has expressed interested in Jaguza and they want to support it to expand across Africa if it can scale across the continent.

Jaguza Livestock App was built to monitor and diagnose early stages of diseases in animals using sensor technology. It can also locate the whereabouts of animals in a given area using GPS, or Global Positioning System trackers.

The inspiration to develop Jaguza was drawn from excruciating memories Ronald Katamba encountered in the late nineties.

After losing his parents at an early age, Katamba resorted to rabbit keeping to raise school fees. The project was, however, short-lived when he woke up one day and found all of them dead.

Before Jaguza, Katamba had developed Lunda, a mobile application that would monitor the reproductive cycle of livestock.

It was after attending a UN Youth Innovation Hangout that he decided to make a more inclusive and sophisticated software.

In Kasenyi, we visited Lameck Kigozi’s farm. Kigozi has been a farmer for over 20 years and he keeps sheep, rabbits, pigs, and cows. His farm is modest but impressive.

Kigozi is currently using Jaguza to monitor his cows.

To diagnose diseases, the Jaguza system has three major components; a computer or phone (smartphone or feature phone) which receive information, a chip with a sensor which is attached to the animal and an RFID or radio frequency identification reader which receives information from the chip and feeds it to the computer. 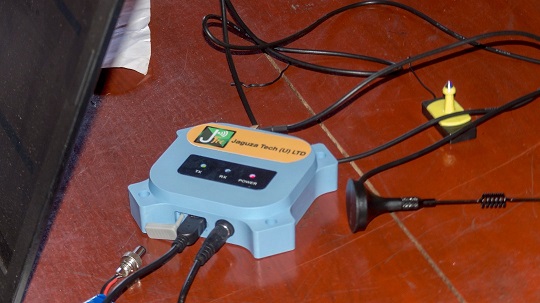 Image of the Jaguza RFID reader

The sensor can, however, only get detected by the RFID reader at a distance of 300 meters. So, in situations, where a farmer has a big farm, an antenna or radar are used to boost the frequency.

It doesn't matter how far your farm is, you can add repeaters every after 300m and you will track the location of your animal on the #JaguzaLivestockApp pic.twitter.com/tSlauqnXx4

The process is no different when tracking movement in animals; however, instead of a chip that is attached to the ear of an animal, another device charged by solar is placed around the cow’s neck (See below. Left is a chip for temperatue measurement and right is the device for movement tracking).

The chip for disease diagnosis has a battery that lasts for about 3 years before replacement while that for movement tracking is charged by solar.

Now, you might be wondering why they haven’t integrated both into one device. According to Charles Kalungi, who leads the tech team at Afrosoft, doing that would make the system more expensive.

The science behind placing the chip on the ear is that a farmer is able to always monitor the cow’s temperatures and these variations will give a picture on the cow’s state of health and reproductive stages.

For movement tracking, you’ll be able to know whether the cows have extended beyond farm demarcations or in case one is trying to steal it.

The Jaguza system does not only help farmers with diagnoses and tracking movements of their animals. Farmers can also create a database for their livestock, helping them to track returns on investment, farm reports among others. 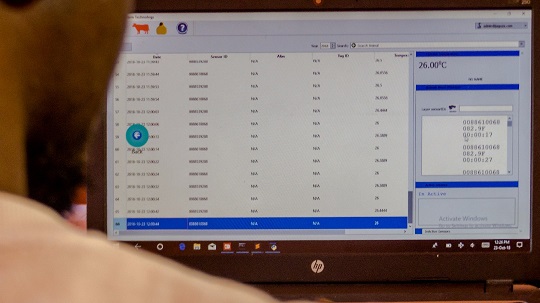 Data as displayed in a computer on the Jaguza Livestock system

The system has already been tested in some 4 districts in Uganda, and it has been used by more than 800 farmers and it is allied to over 60 veterinary doctors.