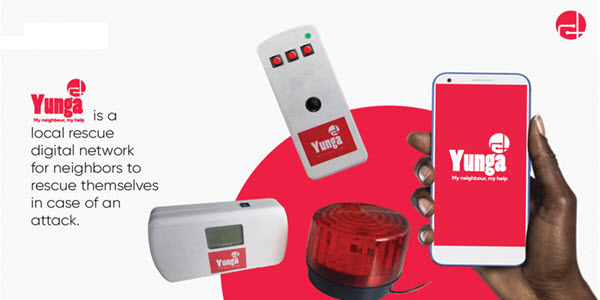 A company of six innovative Ugandans has developed a system called Yunga, aiming at solving one of the country’s complex puzzles: community security.

Attacks on homes in Uganda are so pervasive and they remain unchecked. Some people have had thugs wipe their houses clean as they looked on helplessly.

Such absurd cases (or even worse) are prevalent both in rural and urban communities.

But with Yunga’s technology, all this can be counteracted at an affordable cost, with a more assuring process, according to the company’s plans.

Yunga came into the spotlight when, on September 28, they beat their counterparts to emerge as winners at the Innovating Justice Challenge 2018, which was hosted at Hotel Africana in Kampala.

Yunga was rewarded with 5000 euros (about Shs22 million), on top of joining the 2018 HiiL Justice Accelerator.

The HiiL Justice Accelerator finds and supports “the world’s best justice entrepreneurs in order to create access to justice for all.”

The team is led by Anatoli Kirigwajo.

Yunga features and how they work

Yunga system is made up of three main components, which, according to the startup’s projection, will cost you Shs150,000 (US$40) to acquire.

The system has a control center, which serves as a conduit of signals between the other components.

The other part of the system is Yunga Keypad, which has three buttons, each playing a different role and sending a unique message.

Yunga’s tagline is ‘My Neighbour, My Help’, implying it is essentially about people living within the same neighborhood protecting each other, instead of relying on hired security personnel and police.

They want your neighbor to be the immediate respondent instead of waiting for security agents which could be miles or many hours away.

Must read: Inside the struggle to build robust SafeBoda app

For a given group of people staying near each other, say, in an apartment, housing estate or rental bungalows, Yunga recommends that ten people be linked to the same system.

For those who own smartphones, you can install the Yunga app and use it instead of the Yunk keypad.

Once the app is installed, in case of an emergency, you don’t have to open the app to press a button to send a message; mere shaking your phone and an alarm will go off.

The app also has some other advantages like the Yunga Chat feature, where members can form chat groups and always update each other on the neighborhood security.

Also, when an alarm goes off, a name is displayed on the phone so that people can know who is in trouble. The control center device also has a screen that displays names for those who don’t want to use smartphones.

(The app can only be accessed by people who have bought the system.)

What makes Yunga a better option

Hiring a security personnel is currently quite expensive for the vast majority of the population and even when you’ve them, they’re not really reliable. (For instance, they can doze off and, in some situations, security personnel has been accused of plotting to rob people they are meant to protect.)

But with the Yunga system installed, you are certain that more than one person will be available to help you when a danger notification is received.

The company says the system will be free for the first one year of installation, and thereafter one will be required an annual subscription fee.

They want to develop a premium version that can let alarms go off when a chloroform is sprayed in a house or there is a fire. There will be an annual subscription of US$24(Shs90,000).

According to Anatoli Kirigwajo, with support from HiiL, they are talking to one of the estate owners in Nsambya, a Kampala suburb, to run a pilot project of the product.