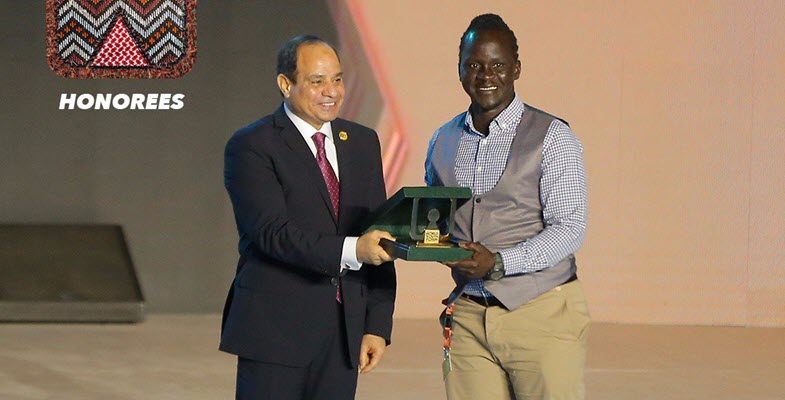 Ricky Papa Thomson is among a few entrepreneurs from Africa and the Middle East that were honoured by Abdel Fattah el-Sisi, the president of Egypt at the 2019 World Youth Forum on Sunday.

The powerful event was held from March 16-18 in Egypt.

The 2019 World Youth Forum was attended by a wide range of participants, including and not limited to heads of states and government, international young leaders, inspiring youth in various fields, prominent international figures and youth groups from around the world.

H.E President Abdelfattah El-Sisi has honored youth from Africa and the Arab regions for their great role in shaping the future.#WorldYouthForum#TheCapitalOfAfricanYouth pic.twitter.com/UPWFzEsa6y

A former Askari, Ricky Papa, in 2014, joined Maxime Dieudonne and Alastair Sussock to start SafeBoda, which has revolutionized the boda boda industry in Kampala, Uganda.

It has since grown from a small rented office in Kyebando, a Kampala suburb to a story-building in Kamwokya, another suburb in Kampala.

In 2018, it made another milestone, launching its second unit in Kenya and an academy to train boda-boda riders in traffic rules, entrepreneurship among other skills important for bettering their work.

The World Youth Forum was first held in 2017 and Sisi is its patron.

Owing to the success of previous conferences, President Sisi urged for more conferences, at least every three months, and announced the launch of an academy to train youths in different skills.

“Holding periodic youth conferences have provided successful results and has been a great communication platform among the world’s youth,” he said, according to MiddleEast Monitor.