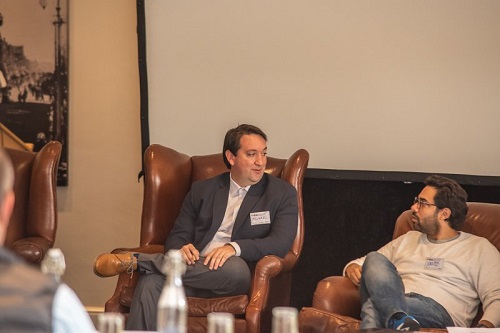 Tugende CEO Michael Wilkerson has said that while there is commendable progress by many countries in sub-Saharan Africa on financial inclusion, having everyone financially included may take a lot of time or never happen.

“Financial inclusion is never going to be something you can declare victory on,” Wilkerson said.

Michael Wilkerson and other fintech startup executives — Vahid Monadjem of Nomanini and Dare Okoudjou of MFS Africa, were speaking ahead of the second annual African Fintech Unconference which was held at Spier Wine Farm outside of Cape Town on September 25 and 26, 2018.

Over the past decade, the progress made within financial inclusion has emerged as one of Africa’s great success stories.

According to the recently published World Bank Global Findex survey, financial inclusion in Sub-Saharan Africa has ‘increased dramatically’ from 23% in 2011 to 43% in 2017.

Notably, findings published by the International Finance Corporation (IFC) show that Africa is home to more digital financial services deployments than any other region in the world – with almost half of the nearly 700 million individual users worldwide.

But as Wilkerson pointed out, even if every person has a bank account or a mobile wallet, they need to have actual funds to put there.

Though he says the financial exclusion challenge may not be completely ruled out, he is optimistic about the current trends.

According to the Tugende CEO, financial inclusion is on the cusp of making even greater strides because of an improvement in infrastructure, and this enabling infrastructure is almost entirely private sector driven.

“For example, we are seeing interoperability between digital wallets, and the revolution in cloud software allows a nimble company like Tugende to service thousands of financing customers without having to get a multimillion-dollar core banking platform,” he said.

“But at the end of the day, none of that matters until people can actually use those tools to improve their lives. Those use cases for average consumers are emerging, but there’s a long way to go.”

As the underlying IT infrastructure enables fintech and financial services players to provide new solutions, companies are beginning to specialize in certain areas.

“The financial inclusion space is now becoming a lot more sophisticated, and there are pieces of the value chain that are ‘hidden’ from consumers or the average layperson that is now benefiting and progressing financial inclusion,” says Monadjem, the CEO of Nomanini, an enterprise payments platform provider that optimises transactions in the informal retail sector.

“Most people have the picture of a P2P M-Pesa transfer, but there are companies like MFS Africa which are connecting the different ‘islands’ of financial inclusion. Overall, we are seeing exponential specialisation of fintech in different areas where I think there will be a lot more progress.”

Dare Okoudjou, founder and CEO of MFS Africa, echoes this sentiment, noting that with more than two million agents now supporting over 200 million digital store of value, the core foundation for financial inclusion has been created.

This foundation is supported by pioneers like MFS Africa, which connects mobile money schemes to each other and to money transfer organisations, merchants, banks and other financial institutions – enabling money remittances to and from mobile money accounts.

“Now that we have the first layer of financial inclusion, supported by a growing agent network, it opens up opportunities for more use cases such as savings, lending and some form of insurance (health and life),” says Okoudjou. “The question has now become: how do you successfully build and scale these types of services on top of this first layer?”

In trying to piece together the complex puzzle of financial inclusion, innovators and leaders across every sphere have to learn to collaborate and work together.

According to Nomanini’s Monadjem, there is a pervasive mentality that everybody is a competitor – which prevents open discussion.

“There needs to be many more sharing partnerships and connections to do so,” he says. “We should speak to more of our fellow fintechs, and even non-adjacent fintechs, because let’s face it…it’s a tough gig!”

Wilkerson of Tugende reinforces this view, highlighting that companies actually learn more by openly discussing challenges and opportunities with each other than by trying to figure things out by themselves.

This is why even companies with completely different revenue models and services should be looking for collaborative outlets such as African Fintech Unconference.

“For example, Tugende doesn’t have a digital product, but we are very happy to be part of AFU because technology is instrumental to our mission of helping people to better their economic future,” he adds. “At the end of the day, execution on the ground matters more – and you cannot patent that. So you might as well learn from people who are also pursuing the same vision, but in different ways.”