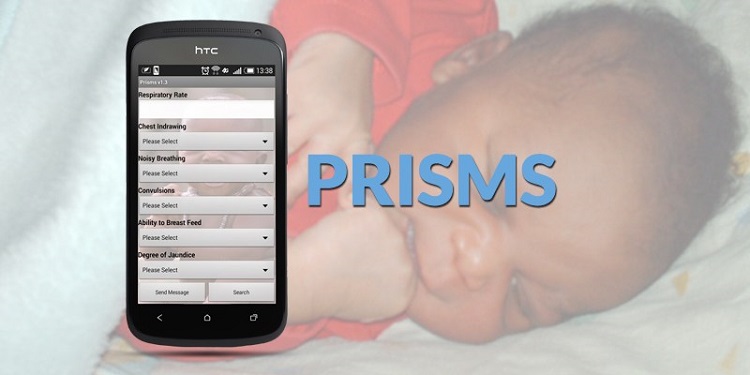 Prisms, an app developed by Ugandan scientists to help in diagnosing diseases in babies has gained global attention after being featured among innovations that are changing the world. In Uganda, death rates in new born babies (0-28 days) are still high, with a Ministry of Health report indicating that Uganda’s neonatal mortality rate is at approximately 29 deaths per 1,000 live births. It has not declined over a period of 15 years, according to the ministry.

Neonatal deaths, according to the aforementioned report, are commonly caused by birth asphyxia, bleeding from the umbilical cord or the nose, sepsis, jaundice and complications of preterm birth.

Observing that there was a limited number of health workers to attend to these health cases, especially in rural areas where there are few pediatricians and limited resources, a group of health researchers from Mbarara University of Science and Technology (MUST) including  Dr. Data Santorino, Dr. Francis Bajunirwe and Martin Mukama under CAMtech invented Prisms, or the Protecting Infants Remotely by SMS (PRISMS) mobile phone application in 2013 to empower frontline health workers such as midwives, nurses, birth attendants with knowledge and information on how to handle neonatal heath cases.

CAMTech is a global network of academic, clinical, corporate and implementation partners working to accelerate high-quality, affordable medical technology development for low- and middle-income based at Massachusetts General Hospital (MGH) Center for Global Health. In Uganda, it is centered at MUST.

Apart from Prisms, CAMTech has also come up with other science innovations to address day to day challenges such as Eco Smart Pads, locally made sanitary pads from sugarcane residue that cuts the cost of ordinary pads on the market by half; SmartNet, a mosquito net monitoring tool; and Sani Drop, a hand sanitizer.

Prisms comes with a form where a health worker enters all the findings from diagnosing the sick baby — age, weight, degree of jaundice, heart rate among other essential details.

The information is then sent to a server, which in turn, in form of SMS, responds with steps a health worker should take to treat the patient. The instructions match those a pediatrician or neonatologist would have provided, developers say.

Prisms first came to the spotlight after scooping a gong in MTN Innovation Awards under the category of health.

PRISMS wins the health category at the MTN Innovation Awards 2017. Thanks MTN for supporting our initiative. #MTNInnovationAwards @PRISMSUganda @drichardmarwa pic.twitter.com/WMJ8J1awMb

After this, the group laid a strategy to implement the system in health centers to achieve its practical intentions. Through a partnership with Baylor Children’s Foundation, On April 21, 2018, they laid a strategy to deploy Prisms in 5 health facilities in South Western Uganda.

The innovation is among the projects that will benefit from the National ICT Initiatives Support Program (NIISP) that is being implement by the ICT ministry.

In a follow-up video conducted by Prisms at Bwizibwera Health Center IV where the app was first deployed, the mid wives and other health workers credited the application for improving their knowledge through recalling of management practices.