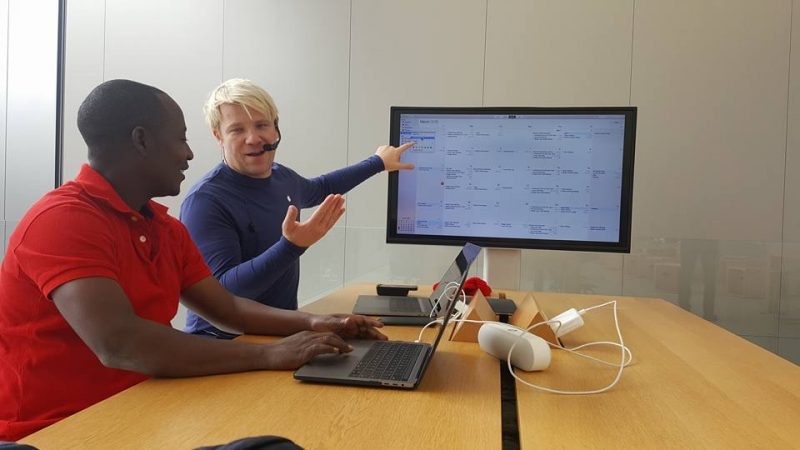 Katamba was in the United States of America in mid-March, and his technology trip saw him visit several companies in the U.S. while attending multiple conferences, including Microsoft Tech Summit, World Agric-Tech Innovation Summit and Hive Entrepreneurship Retreat.

In the deal with Microsoft, Katamba has been tasked with training university students and other young learners about Microsoft products.

The training will involve exposing learners to IoT or The Internet of things. IoT is a network of physical devices, vehicles, home appliances and other items embedded with electronics, software, sensors, actuators, and connectivity which enable these objects to connect and exchange data.

In basic terms, the IoT provides for more integration of the physical world into computer-based systems, which in turn results in improved efficiency, accuracy and economic benefit while reducing human intervention.

In an interview with this website, Katamba, who is still in the U.S. — said that Microsoft has promised to “provide me [with] equipment” to use in the process, as well as support him with Azure cloud services.

Azure is a cloud computing service created by Microsoft for building, testing, deploying, and managing applications and services through a global network of Microsoft-managed data centres.

In Uganda Katamba runs a software company called Afrosoft IT Solutions, which he started in 2008 after contesting in the Imagine Cup, an annual competition funded by Microsoft Corp.; the contest brings together student developers worldwide to help resolve some of the world’s toughest challenges.

Through his software company, Katamba has been able to support many rural health facilities and agriculture organizations by developing applications they use in various aspects like diagnosing infections, water treatment among others.

Some of the organisations that have gained from his works include Has Children Hospital, Kisakye Heath Center, Esaff Uganda, Uganda Oil Seed Producer and Processor Association (UOSPA) among other nonprofit organisations.

An application called Jaguza Livestock App, also developed by Ronald Katamba drawing inspiration from growing from an animal rearing background, was built to monitor and diagnose early stages of diseases in animals, using sensor technology, and locate the whereabouts of animals in a given area using GPS, or Global Positioning System trackers.

The app has since seen him amass revered honours from highly contested technology competitions including ITU Telcom World Entrepreneurship Award 2015, where Jaguza was named the best entrepreneurship project of the year.

Jaguza was also named among best nine Agriculture Projects in Africa 2015 by CTA Africa and among the best 20 projects in East Africa by Ashoka Change Maker.

CommonWealth Telecommunication Awards called Ronald Katamba’s app the best e-agriculture ICT Innovation and he was also awarded by the CTO Forum, a powerful Indian magazine in 2016.

Katamba, who describes himself as a “curious, responsible and proactive leader” says most of the support has come from his brother and a cousin, who is a systems engineer with expertise in web and mobile programming. (Names of both individuals were withheld.)

An innovator, researcher and practitioner – all his words – Katamba says he’s currently working on the application of Information and Communication Technologies for Sustainable development (ICT4D).

He says his work focuses on solving problems of rural communities through technology.

The problems he focuses on are mainly to do with agriculture, health, education and natural resources management in developing and emerging regions.

For the 17 days he spent in the U.S., Katamba says benefited a lot apart from the aforementioned deals he secured from Apple and Microsoft.

To begin with, he says, he has connected with lots of people, including venture capitalists, who have offered to support him.

He also says that going on this trip, which was sponsored by his company and partly by World Agric-Tech Summit, helped him showcase Jaguza to an international market, and, according to him, many countries showed interest in the project.

To reach these fascinating heights, the innovator hasn’t worked alone; it’s been through collaborating with various people, including his major Ugandan sponsor (name withheld), whom he says without him — Jaguza would never have seen the light of the day.

“My sponsor, he has sponsored wholeheartedly; if it was not for him, Jaguza was going to be history … I thank him and may the Lord bless his work. There is also Mr Tommy, who introduced me to the sponsor who has done wonderful things for me,” Katamba said.

To run Jaguza Tech Uganda and Afrosoft IT Solutions Uganda Limited, Ronald Katamba works with a team of 49 “brilliant younger people”, who have pushed so hard for the company to grow to this incredible level.

Apart from the team of young people he deals with at the company, Katamba has also mentored multiple youths who have seen their start-ups blossom. He does this through mentorship programs.