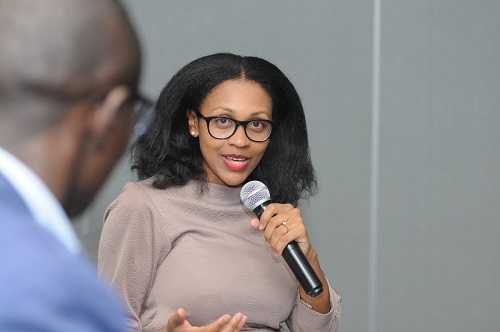 Joy Doreen Biira, a Ugandan journalist currently based in Kenya, has been named among the top 250 business and technology journalists in the world. The list was compiled by Derin Cag, the founder of RichTopia, a media company that focuses on leadership, entrepreneurship, marketing, technology, economics among other related topics.

Doreen Biira appeared number twenty-two on the list that, according to the author, features “influential people at effectively having soft-power and being pro-active, particularly in the digital sphere.”

@joydoreenbiira congrats, you're #22 on the Top 250 Most Influential Biz Journalists this year. https://t.co/zr7BmJ604V via @Richtopia

The thirty-two-year-old, who started her journalism career in 2008 with NBS Television, has more than ninety thousand followers on Twitter and more than thirty thousand on Instagram. On the list, she ranked higher than renowned corps like BobWoodward, an associate editor at The Washington Post, Simon Jack, a business editor at BBC and Merryn Somerset Webb, the editor-in-chief, MoneyWeek.

See: How Taxido wants to dominate the Ugandan ride-hail industry

Doreen Biira as a journalist

Biira joined journalism after deferring her Information Technology program at Makerere University to start training in the media industry. She worked with NBS Television from 2008 to 2011, before quitting, in 2012, to work with the Standard Media Group as a news anchor at KTN.

While at NBS, she also part-timed at Capital FM in Kampala, where she co-hosted the station’s weekend program, ‘The Dream Breakfast show’, hosted a Sunday drive show and produced the talk show, ‘The Capital Gang’.

It is at the start of this year that reports emerged that Biira had left KTN to work with Kenya’s ministry of mining as a communications advisor.

The mother of two is also currently a creative director at Africa Speaks Ltd and a host of [email protected], a show on the Germany-based television station Deutsche Welle.