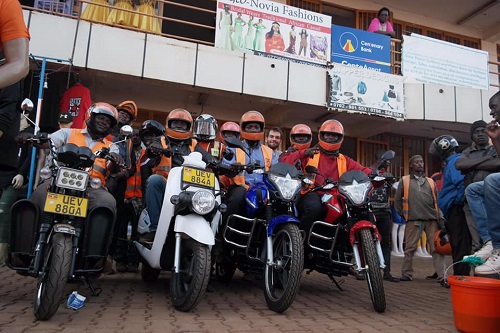 Zembo, a startup founded by two French engineers, has started testing its electric motorcycles in Kampala.

Daniel Dreher and Etienne Saint-Sernin are the founders of Zembo.

The startup offers electric motorcycles to boda boda riders in Africa. The motorcycles are powered by Lithium batteries which are recharged using solar energy.

Ricky Papa Thomson, a co-founder of SafeBoda on Friday shared some of the pictures of the motorcycles that are being tested in Kampala.

Thomson said Zembo brought them in the country a week ago.

When we contacted Thomson, he told SautiTech that they are in talks with Zembo for a partnership but he could not reveal details of the launch when a person asked him in the comment section of his post.

Officials were also not readily available for comment but we shall avail details as soon as they respond to our questions.

Dreher, one of the Zembo founders, has worked in Africa for a while. He did a thesis on rickshaws in Tanzania titled “Technical and economic feasibility study on electric-powered rickshaws in Dar es Salaam, United Republic of Tanzania.”

In Uganda, he has worked with a company called New Age Solar Technologies Ltd since 2016, according to his LinkedIn profile.

Zembo is among the few startups that are trying to revolutionize the boda boda industry in East Africa.

Electric motorcycles are being seen by many as products that could reduce transport costs since boda bodas will no longer need to use fuel, which is increasingly becoming expensive.

For instance, Ampersand has said its batteries can deliver around 60 km of range and will require swapping out less often than drivers commonly refuel.

The other reason electric motorcycles are gaining public acceptance is their contribution to environmental protection.

Zembo is headquartered in Kampala, according to the information on the website, with another office in France.

The startup is currently being supported by five organisations including the French ministry of environment.