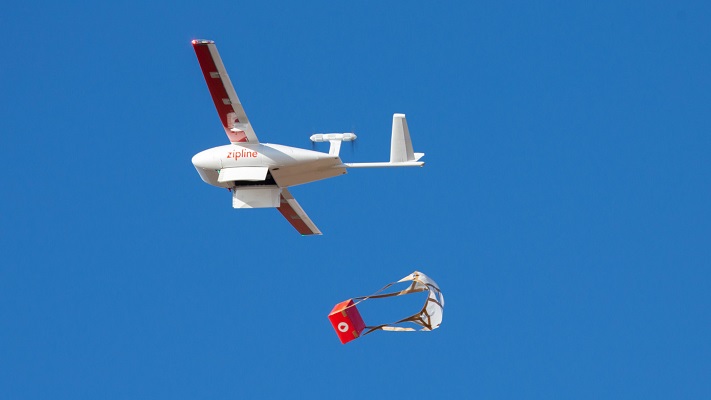 Zipline, a California-based UAV manufacturer and logistics firm has made Ghana its second destination in Africa, having spent three years delivering medicines in rural Rwanda.

The development comes after the firm has raised US$3 million from The UPS Foundation, which is also doing an analysis of Ghana’s healthcare supply chain in order to discover ways of optimizing the delivery of healthcare products. On top of the aforementioned, the Foundation will also give Zipline Ghana $600,000 of in-kind shipping services, according to TechMoran.

Founded in 2014, Zipline designs and manufactures its own UAVs, launch and landing systems and logistics software.

In entered Africa in 2016 after sealing a deal with the government of Rwanda. With later support from the UPS Foundation and Gavi, as of April 2018, Zipline Rwanda drones had made over 4,000 deliveries in Rwanda covering over 300,000km and delivering over 7,000 units of blood, according to Keller Rinaudo, the firm’s chief executive.

According to Runaudo, Zipline Rwanda was making between 20 and 30 deliveries a day.

Since its founding, Zipline, which claims to be the first national drone-delivery program at scale in the world, has raised $41 million from investors, including Sequoia Capital, Google Ventures, Microsoft co-founder Paul Allen, Yahoo co-founder Jerry Yang and Subtraction Capital.

Must read: In Rwanda, Volkswagen to introduce electric cars for ride-hailing

As it launches its Ghanian unit, Zipline plans to operate 24 hours a day, seven days a week, from four distribution centers—each equipped with 30 drones—and deliver to over 2,000 health facilities serving 12 million people across the country, according to TechMoran. This time it is also has backing from the Gates Foundation and Pfizer.

Zipline Ghana will collaborate with the country’s government to integrate its drone network into the national healthcare supply chain to fight problems of vaccine stockouts in health facilities.

“The ability of the Government to supplement routine immunization on demand will allow us to make sure that there will always be enough life-saving vaccines for every child in Ghana,” said Dr. Seth Berkley, CEO of Gavi, the Vaccine Alliance, according to TechMoran. “This is an exciting development for Gavi that is ultimately going to ensure we leave no one behind and help us protect more children living in remote areas against vaccine-preventable diseases,” he added

In addition to the rollout of Zipline Ghana, according to TechCrunch, the logistics firm plans to move from pilot-phase to live-delivery of medical supplies in the U.S. sometime this summer.