Malware is any software intentionally designed to cause damage to a computer, server or computer network.

A malicious software damages a target device after it has been implanted or introduced in some way into that particular gadget.

For instance, unlike iOS, Android is a pretty open system which makes it easier for scammers to tweak the system and do potentially damaging things like writing virus codes and embedding them within an application.

On Android, you can flip a switch to install apps from “unknown sources.”

This lets you install applications from outside Google Play, which is Google’s app store. Even if Google doesn’t approve of an app, you can install it from elsewhere.

Google is also less restrictive about apps in their own app store.

On iOS, you can only install applications from Apple’s App Store. If Apple doesn’t want to approve an app or they remove it from the app store, you just can’t use it.

“Sideloading” unapproved apps require jailbreaking, which is a headache.

So, to prevent malware from installing in your device here’s what you need to do:

Untrusted sources of applications are application storage platforms that are not vetted by Google or the maker of the operating system on which your device is running.

The above doesn’t imply that any application that’s not from the Play Store is bad for a device. If that were the case, Android devices wouldn’t provide an option where you can accept apps from other sources than the Play Store.

There are developers who don’t want to put their apps on the Play Store because Google restricts them on how they earn from their creations.

That being said, it is better to download apps from recommended sites than any other source you don’t know about.

If you decide to take the risk, make sure you do thorough research, read reviews and ask people who have used that app before, for clarity.

2. Download apps only from Play Store or authentic app stores

Android mobile phones have Google Play Store where most or all applications, games, themes and many other applications can be downloaded from. It’s always important that you use only authentic and well-recognized sites for all your applications.

Google Play and Amazon are some of the authentic sites to get applications from.

See: Bad habits that are destroying your device

3. Always remember to uncheck the box that says install from unknown sources

All Android devices come with a preinstalled lock that allows you to stop all applications that are not from the Play Store.

The software notifies you each time a new software is about to get installed to prevent automatic installation of an app from an unknown source.

When you uncheck the box as shown in the video below, automatic download of malicious software is restricted.

4. Analyze what an app wants to access during the installation process

If you an Android user, you must have come across one step during the installation that shows all the sections that the software or application will access your phone. 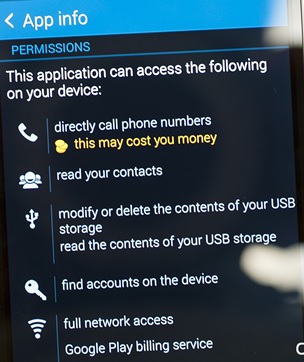 It is important to always read and understand what sections of your phone will be affected by the new application that you have installed.

Some of these applications will only make the system crash and fail to work hence damaging your device.

See: Devices that might be spying on you in your own house

Reading this permission will allow you to either continue with the installation or stop and look for a better authentic one on either Amazon or Google Play Store.

5. Keep a virus scanner in your device

Most people have shunned antiviruses because they say they slow down their devices and revoke some upgrades.

While the above is partly true, some people face such challenges because they downloaded a free unpopular anti-virus or their choice is not the best for their phone or computer in terms of RAM.

See: How to tell if you have a virus on your Android

When you download an anti-virus or virus scanner for your device, you have to make sure that’s regularly updated.