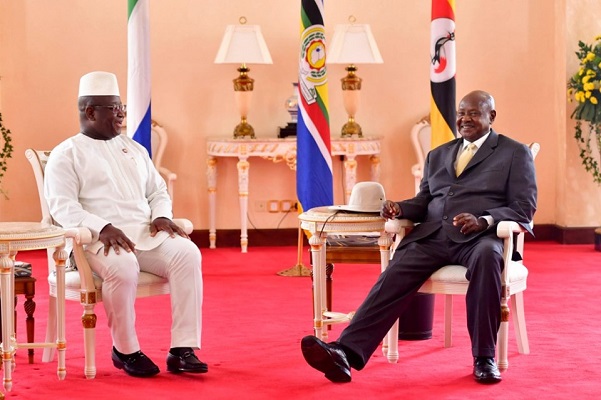 On Wednesday all roads will lead to the Kampala Serena Hotel as Uganda hosts the 2nd edition of the Africa Blockchain Conference.

A lot is expected to happen at this powerful 2-day conference that is being organized CryptoSavannah and the Blockchain Association of Uganda with support from the Ministry of ICT and National Guidance.

Below we guide you to some of the key things you should look out for so you don’t miss any.

One the first day of the event, which will kick off early morning, the attendees will listen to speeches from two African Presidents: Yoweri Museveni of Uganda and Julius Maada Bio of Sierra Leone.

Bio arrived in Uganda today and he’s being hosted by Museveni at State House in Entebbe.

In a Facebook statement posted Monday, CryptoSavannah said he will give a keynote address on ‘Preparing Africa for the 4th Industrial Revolution’, which is the event’s theme.

At the conference, over 3000 people that are anticipated to attend will have an opportunity to see Sophia, the world-famous social humanoid robot developed by Hong Kong-based company Hanson Robotics, in action.

The robot, which uses artificial intelligence, facial recognition and visual data processing to function was introduced to the world in February 2016.

It can display more than 50 facial expressions. Commenting on Sophia’s participation in this year’s Africa Blockchain Conference, Kwame Rugunda, the Chairman of the Blockchain Association of Uganda, said; “We are pleased to be hosting Sophia at this year’s Conference. She highlights many of the topics of interest that will be discussed at the Conference and shows how technology is enriching humanity.”

He added, as quoted in a press statement: “It’s human-like appearance and ability to express emotions will be a major attraction for all those that will be in attendance. Sophia also featured at this year’s Transform Africa Summit that happened in Kigali, Rwanda.”

In its first edition, the Africa Blockchain Conference was entirely about Blockchain. But this time, discussions will switch to all emerging technologies (artificial intelligence, nanotechnology, blockchain, drones, robotics, big data and so on).

So, in the two-day expo, which you’ll access after paying Shs15000, the exhibitions will give insights into how these new technologies will shape the future of work, public service, economy and so on.

Some of the firms that have already confirmed participation include; Ubuntu group, Yo Uganda, KLF Coin, Kwiksy, Century Group, and Huobi.

“The tech expo will provide inspiration for many people as well as an education platform on how technology is evolving and how it can impact businesses for greater growth. As the conference focuses on preparing Africa for the 4th Industrial Revolution, we will also run the Africa 4.0 Tech Expo which will showcase an experiential virtual tour and practical demonstrations of 4IR technologies under one roof,” said CryptoSavannah Director, Noah Baalesanvu.

The Dome will be the centerpiece of the Tech Expo where visitors will experience IoT functioning within a smart home, the speed of 5G connectivity, the impact of artificial intelligence in our everyday lives, how drones and robotics are changing the fields of agriculture and manufacturing, how augmented reality and virtual reality are changing healthcare, and the utility of autonomous vehicles in our lives, and much more.

Read more about the expo here and here

A number of reputable figures in the political and business space have been already confirmed to speak at the conference.

Aside from Museveni and Bio, other experts that will speak more on the theme of the conference, include Toro Orero, a partner at QI Holdings in Nigeria; Ian Balina, founder 100X Advisor, USA; Sheikh Khaled, an Abu Dhabi-based tycoon who wants to buy Newcastle United.