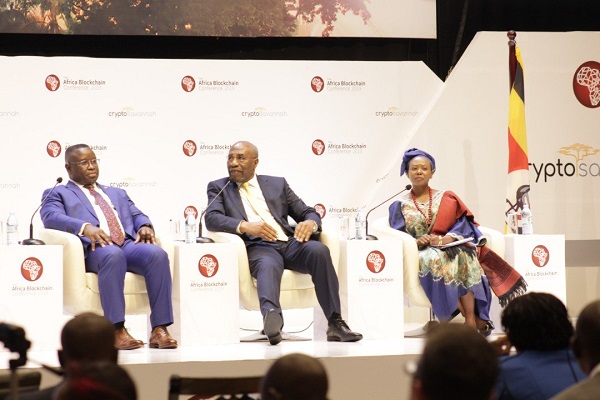 The 2-day Africa Blockchain Conference kicked off Wednesday morning. Hundreds of people turned up at Kampala Serena Hotel to listen as experts discussed how Africa can participate in the Fourth Industrial Revolution also known as 4IR.

We attended and below we highlight some of the points we noted from the event.

First, he said, as was promised by the ICT and National Guidance Minister Frank Tumwebaze, a National expert task force to champion the adoption of Emerging Technologies in Uganda had been appointed. It is a 32-member team and it was unveiled in April. He is also part of the committee, which is headed by former ICT Minister John Nasasira.

He also noted that the Bank of Uganda (BoU) had set up a team to monitor and advise on the use of Blockchain technologies and regulations have been drafted by the Capital Markets Authority (CMA) to guide on the use of cryptocurrencies.

Our CEO, @KwameRugunda is addressing guests, giving a background to the #AfricaBlockchainUG19, the progress our countries have achieved since last year's conference. #Africa4IR pic.twitter.com/t4fnMWfNjw

Next, was Mamadou Kwidjim Toure, the founder of Ubuntu Group who said that for Africa to take advantage of emerging technologies, we must first understand our history, where we are so that we know which technology is important to lead us to the future we need.

Prof. Charles Kwesiga, the executive director of the Uganda Industrial Research Institute, walked the audience through the past phases of innovation and industrialization.

According to his presentation, in 1784, the world saw the emergence of mechanization, water power and steam power. This was followed by mass production using machines and electricity in 1870. Then 1969 ushered in computer and automation and we’re now in a world that is transitioning to a lot of cyber-physical systems.

Prof. Kwesiga said that for industries to succeed, there must be appropriate technology, human capital (skilled manpower), and affordable financing. He said that efficiency in production is the essence of industrialization.

What can Africa can do to embrace 4IR

African countries also need to understand and adapt to global trends as well as create and maintain a socio-political environment that ensures industrialization.

He also urged governments to invest in the education of citizens about these technologies and what they’re about.

Dr. Elsie Kanza, head of Africa at the World Economic Forum wants us to ponder over the following: How will my sector look like in the future? How much should I disrupt myself? How do I balance clear direction with agile innovation?

She said that stakeholders in the tech sector should know that it’s not easy to always be on track with the digital world, giving statistics of how most efforts in the digital space always fail to deliver, with only 5% exceeding expectations and 71% settling for dissolution.

#HappeningNow : Dr. Elsie Kanza, Head of Africa @wef is sharing "A Global Perspective of the 4IR" at the #AfricaBlockchainUG19 pic.twitter.com/ySQHiiI2bx

In his presentation, Edgar Kasenene, the CEO of Retro Rabbit Rest of Africa, advised companies to always be ready to experiment with new ideas and invest in the manpower to keep relevant.

He gave an example of banks which he said should re-skill their workforce on how to use digital tools so that instead of setting up more traditional branches, they should find ways of exploiting applications which are now handling most financial transactions.

"Today in Africa, digital highways today are as important as physical highways. As long as we provide the platform that helps grow the digital startups, we are not behind". -Edgar Kasenene#AfricaBlockChainUG19 #Africa4IR pic.twitter.com/zpEdUuhO7Z

Uganda’s junior Finance Minister David Bahati revealed to the attendees that Uganda is committed to embracing 4IR, saying that the Central Bank is coming up with the best policies to guide on Blockchain adoption and other technologies like cryptocurrencies that come along.

He also said that the government is working on a number of initiatives, naming some like the efforts on connecting the country to the national backbone, rolling out innovation hubs and giving innovators necessary facilities to develop their talents.

“Where we are now, Uganda is ready to embrace the fourth industrial revolution,” he said.

Hon. David Bahati, representing Hon. @FrankTumwebazek @MoICT_Ug at the #AfricaBlockchainUG19
"We were unfortunate to be left out in the 1st, 2nd, and 3rd industrial revolution. However, for the 4IR, we have no excuse. #Africa4IR pic.twitter.com/hZv9XMO7OJ

He said that the approaches taken in adopting emerging technologies “must be deliberate, intentional and progressive”, adding that young people have to be put at the forefront of these technologies.

Also important is ensuring that the opportunities presented by these technologies are closely monitored while 4IR seeing as “a paradigm shift that enhances those foundations that already exist” and not a replacement.

Additionally, he said everything Africa embraces should not compromise “our values.”

Looking at Africa’s immediate needs, he asked innovators and policy formulators to look at how technologies like Artificial Intelligence and Blockchain can improve our health care, go over “impediments that stand in our way” while supporting the increase of household income.

In his speech, Maada Bio suggested some of the things African countries must do to ensure that they enjoy opportunities that 4IR brings.

Number one, he said governments need to develop policies that are pro-innovation, technology and communications. And they must be domesticated to “fit our visions”. There is also a need for the establishment of institutions that will be involved in the implementation of ICT transformation.

Additionally, governments have to create strategies that are specific to their country needs while investing heavily in human capital with better health care, education, and food security so that we have a generation that is fit to “drive technology and innovation” in Africa.

"There are many use cases for blockchain and all 4IR technologies in our very communities; digital identities, healthcare, social &public services, educationrecord tracking and verification, govt decisions"- H.E. @JuliusMaadaBio #SierraLeone #AfricaBlockchainUG19 #Africa4IR pic.twitter.com/u1SgDDCxnN

The event will end tomorrow evening. The tech expo is still underway as well. And tomorrow, attendees will get an opportunity to see Sophia, the humanoid robot in action. She was not brought to Uganda, with organizers citing “health reasons”.