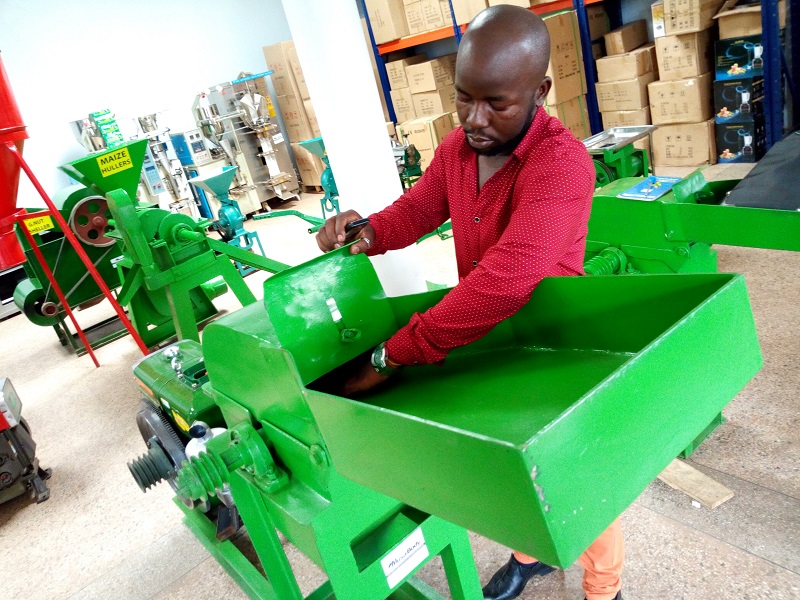 Poultry farming in Uganda is increasingly becoming more commercialized in Uganda, with many farmers now beginning to keep thousands of birds targeting to reap bigger profits.

However, many farmers are constrained by feeding the birds, with the feeds becoming more expensive by the day.  Poultry mash made up of silver fish, bones, maize and other leftovers are expensive to purchase.

But with the new cheap technology, poultry farmers can now crush the feeds themselves from their homes and feed the birds.

To demonstrate this, SautiTech went to Gayaza, Kasangati Town Council in Wakiso District where John Kabazi, owns a poultry farm of 2,000 birds.

Kabazi explains that before acquiring the machine, he used to spend a lot of money to buy feeds from shops but with the poultry feed crusher, he has saved a lot.

“The poultry feed crusher just gives you food at a time when you need it instead of spending a lot of time running to poultry feed shops. It saves any farmer energy and time in feeding their birds,” he says.

Kabazi says daily, his chicken consume between 100 and 150 kilogrammes of feed daily.

The mere fact that the machine crashes between 600 to 900 kilogrammes, Kabazi opines, makes the machine reliable because it has a high production capacity than the rate at which the feed are used, unless it is used for commercial purposes.

“After ensuring that the maize cobs are thoroughly dry, I load them in the machine crushing pot where they descend to where the blades are to crush them into fine particles and tapped at the production point in a sack as a finished product,” Kabazi explains.

It is manufactured with in different sizes but that during its operation, you just have to change the sieves depending on what poultry food you are crashing or the purpose for which it is meant.

It is a three-phase mortar power machine that uses either hydroelectric power or diesel.

“If the food is to be fed on chicks, you have to use a perforated sieve known as a starter. The machine crushes the feeds to smaller particles. If the feeds are meant for bigger chicken, you can either use the medium or the finishing sieve that has bigger sieve holes for crushing food edible by grown chicken,” Ssebbaale explains.

“The kind of servicing that there is for this machine is changing or replacing the oil and oil filter every time you change the oil and changing the grinding hammers that cut food since it sometimes contains soil,” Patrick Muhumuza a farmer in Gayaza who has used the crusher since 2010.

The belts can also be changed overtime if they are of bad or poor quality. Ssebbaale says the machine comes with a one-year warranty the moment a farmer procures it and that if you experience any mechanical breakdown, it is repaired by the company within the one year. If it breaks down after the one-year warranty, the farmer buys spare parts and the company technician fixes it without a cost attachment.

Moses Sentongo, a businessman who uses the machine in Masaka for processing maize and silver fish says besides regular oiling, the poultry feed crusher is easy to clean and maintain as long as a farmer pays attention to it.

“All you need to do is using a wet clothe to clean the top outside parts because as it runs, the foods it crushes produce a lot of dust that needs to cleaned off to maintain it clean. The care you give it determines how long it will last,” Sentongo, who has owned the machine for now three years, says.

He uses it to crush maize and silver fish for farmers who are not able to buy the machine on their own and charges them a relatively smaller amount for servicing.

At Musa Body, the three-phase poultry feed crusher costs Shs7m while the single phase costs approximately Shs4.5m. These all come with complete engines.