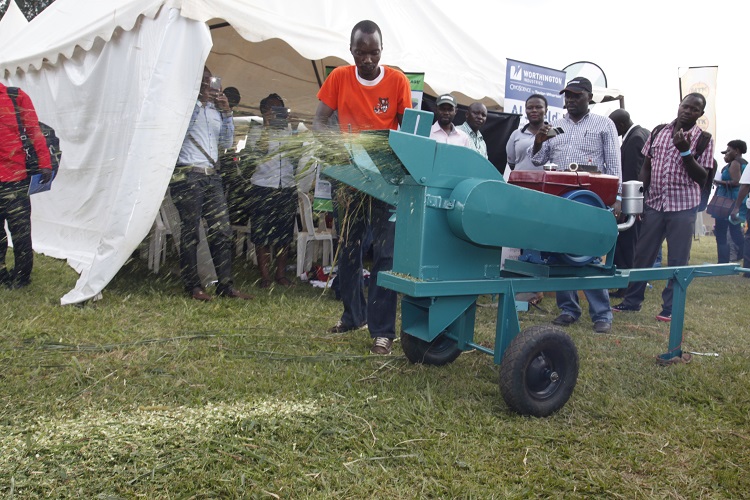 It is common to find livestock farmers feeding pasture or grass to their animals straight away as they harvest it from the garden without chopping it into small pieces.

Others chop the pasture or grass into pieces using machetes or other rudimentary tools, thus producing unequal pieces.

Bruhan Lugoloobi, the proprietor LUBUS mixed farm and information centre, located in Ntooke village, Kayunga District emphasises the significance of chopping the pasture into pieces before giving it to the animals.

“Animals use less energy when they are fed on chopped pasture, which makes them grow fat or produce a lot of milk in case of a beef or dairy cow respectively,” Lugoloobi says, adding “Therefore, chopping of pasture into small pieces should not be taken for granted for people who are doing commercial livestock rearing.”

According to Lugoloobi, a farmer must use a machine called a chaff cutter to chop the pasture or grass into pieces, which animals can easily feed and chew.

A chaff cutter is a mechanical device for cutting pasture into small pieces before being mixed together with other forage and to animals.

It is powered by an engine so a farmer just feeds pasture into it as it carries out the chopping.

Chopping the pasture aids the animal’s digestion and prevents animals from rejecting any part of their food. Lugoloobi says chaff cutters come in different sizes.

There are those which are big and chop big volumes of pasture in little time while there are also small ones for farmers with small herds.

“A farmer’s choice on which size of machine to use depends on the size of herd and the money he/she has budgeted for that particular item,” Lugoloobi says.

Ali Mftiundandi, who sells agro machinery on Nasser road in Kampala says a small chaff cutter which is powered by a 12 HP engine costs Shs5m.

“This one uses only 10 liters of diesel to chop three tonnes of pasture,” he says, adding, “Use of a Chop cutter is the only way to go as it makes the work of chopping pasture into pieces very easy for livestock farmers, especially those with big herds.”

Besides the chop cutters that are manufactured abroad, Lugoloobi says there are some that are fabricated locally and these cost less than the imported ones.

One such company is Munyegera Metal Works, found in Mayuge Town, Mayuge district which fabricates various types of agricultural or farm implements.

A fabricated chaff cutter goes for less than a Shs3m for medium size, Geoffrey Munyegera the owner of the company says.

Lugoloobi says that the biggest advantage of using a Chaff cutter is that the animals find it easy to feed on the pasture so they produce a lot of milk in case of dairy animals.

Secondly, a farmer spends less time chopping the pasture so has enough time to do other farm activities. “One person can chop tonnes of pasture in little timer,” he says.

Also, pastures are not wasted when they are chopped as animals eat all of it unlike when it is not chopped.

It requires servicing due to effects of wear and tear. “A farmer with one or two animals may find it not cost-effective as the profits they get from the animals may not sustain it,” Lugoloobi says.