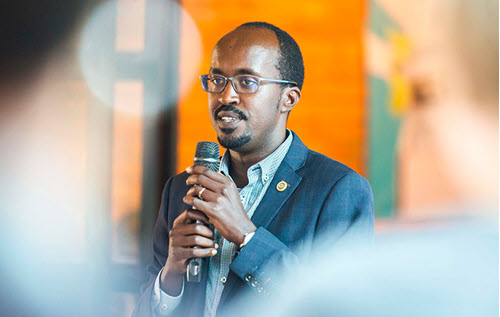 Uwajeneza moves to Andela’s first pan-African hub with a career spanning over a decade in the ICT sector.

“As a country director of Andela’s first pan-African hub, Clement Uwajeneza will be providing strategic leadership and direction to the Kigali office and will be responsible for its programmatic and operational management,” reads an October 10 statement by Andela Rwanda

The software training and job placement firm opened operations in Kigali, Rwanda launched its operations in the country in mid-July of this year.

At the launch, Rwanda Development Board Chief Executive Officer, Clare Akamanzi said that the Rwanda-Andela partnership is expected to generate up to US$30 million in the next five years from the products that will be produced.

“We welcome Andela to our investment community. Andela will train and employ up to 500 Rwandan software developers in 5 years, generate up to $30m exports of IT services and attract regional developers while establishing its Pan African hub here. A huge step towards the knowledge economy,” Akamanzi said on Twitter.

Andela Rwanda has inked a deal with Kigali to recruit up to 500 Rwandans with expertise in software development and offer them six months paid training.

The process is expected to last a period spanning five years.

Thereafter, the trainees with Andela Rwanda will get jobs as remote members of software development teams at world-leading firms.

Andela works with over 150 firms spread across 45 cities globally.

During the launch of Andela Rwanda in July, Andela co-founder and Chief Executive Officer, Jeremy Johnson, said Kigali was chosen as Andela’s first Pan-African hub due to its strong existing infrastructure, technological excellence and ease of access for developers across the continent.

“Our partnership with the Government of Rwanda is a new model for Andela, and we are thrilled to have found a partner whose mission is so closely aligned with our own; to grow and sustain a Pan-African elite tech workforce,” he said.

“In Kigali, we have found a location that makes travel to-and-from other African countries seamless and also has the modern and connected infrastructure we require to collaborate with a global workforce,” he said.

On his appointment, Clement Uwajeneza told media that he would ensure that Andela Rwanda plays a big role in helping the country achieve its goal of becoming a knowledge-based economy.

“We have been aiming at creating employment for highly skilled technology practitioners within the Rwanda tech-ecosystem and Andela has figured out how to do this fast and at scale. Our ambition for Rwanda is to develop and employ more than 500 software developers within the next five years,” he said.

“The success of Andela pan-African hub in Rwanda will considerably contribute to at least 3 key areas of Rwanda’s economic transformation plan towards a knowledge-based economy: exporting knowledge through BPO; becoming an African technology hub, and advancing technology entrepreneurship,” said Uwajeneza.

Congratulations to you Mr. @cuwajeneza . @Andela_Kigali have chosen a great leader. Ready to shift my carrier through #Andela. pic.twitter.com/mY64UO26bg

Andela makes money by charging clients (the international firms in which it places the software developers) per workers placed in the respective firms.

The firm collects the proceeds, pays the developers about a third of the amount with the rest serving as their revenue.

Clement Uwajeneza started his career in the ICT sector working with the University of Rwanda from 2007 to 2010, before moving to Carnegie Mellon Universtiy, Rwanda as a visiting lecturer in 2012.

While working these jobs, he was also overseeing operations at Axis, a software company he started in 2005 and left as a chief executive officer in 2014.

Between July 2011 and December 2014, Uwajeneza was the president of Rwanda Software Developers and Application Providers Association. He co-founded the organization.

Between March 2013 and May 2016, he was the board chairman Rwanda ICT Association, a non-profit making organization that represents the Rwanda Internet community.

In 2011, he also confounded kLab Rwanda, an innovation Space that promotes, facilitates and supports the development of innovative ICT solutions. He worked with the establishment up to 2016.

In December 2014, he was appointed the chief executive officer of Irembo or RwandaOnline Platform Limited, an e-government services body.

He left in July 2018 to join Umva.ai, which he has been working with until he was appointed Andela Rwanda country director.