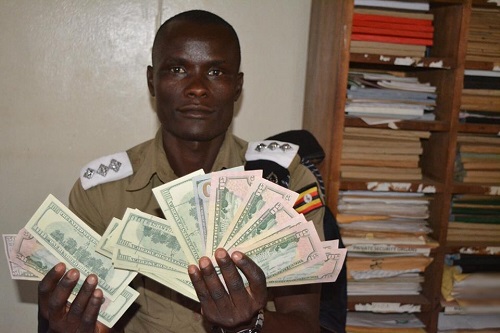 Kira Road Police on Friday arrested two men at Opportunity Bank in Kamwokya, a Kampala suburb for allegedly issuing $1800 (about Shs7 million) and £1100 (about Shs 4 million) counterfeit notes to a bank teller.

Police identified the suspects as Ali Kassuja, 45, and Alfred Mugabe,33.

They are both residents of Mpererwe, also a Kampala suburb, according to Kampala Metropolitan Police (KMP).

According to KMP, the duo on Friday morning went to Opportunity Bank and presented the counterfeit notes to a teller.

However, the teller realized the notes were fake as he counted the money, prompting him to alert his superiors, who, in turn, called the police.

The KMP Luke Owoyesigyire said the duo is currently being investigated.

KMP says that upon questioning, Kassuja disclosed that the counterfeit notes were being printed from Kenya and sold to various wrong elements in the counterfeit businesses at a cheap cost.

The two suspects are currently detained at Kira Road Police Station vide SD REF 59/17/10/2018 and are to be arraigned before courts of law on charges of issuing counterfeit notes.

How Powah is investing Shs95m grant from TDB