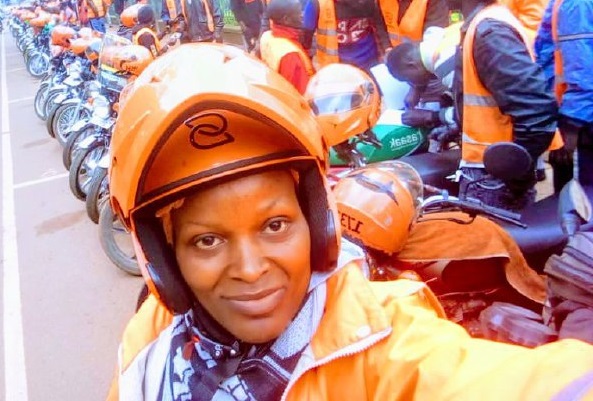 When you place an order for a SafeBoda ride, a check in reality proves that most of your focus is on your destination. The following minutes that involve being matched with a rider, directing them to where you are, and the trip – are all some sort of normal procedure. But what would be your reaction if the rider you are matched with is Dathive, SafeBoda’s one female among the over 18,000 riders?

We spoke to her and learnt how she has coped for the past year in the industry that has been heavily dominated by men.

Dathive joined SafeBoda in March 2019, and is the second ever female to join the the bike-hailing service. At the time, she had a motor-bike lying idle at her home, was an experienced rider, and believed joining the company was the perfect start for her dream to get to another level. She’s now made a year on the team, has acquired a second bike already, and you can feel how proud she is to work with the brand.

Like you would imagine, it has not been as smooth a road. She points out the major challenge she faced in her early days as a rider where passengers found it hard to believe that it was a female rider that was to drop them. Safe for those that would later call back to accept the ride, a number would reject the ride and order for another rider. This, she says, is no longer the case today as many of her customers are now used to being matched to her.

Dathive is willing to be a trainer to any other females interested in joining SafeBoda, and can offer mentorship and guidance from her experience as well as her other bike in the event that the interested party does not have one. She believes that for one to achieve success in employment, they need to have passion for it. This can be the key driver to one progressing to wherever they wish to be in life.