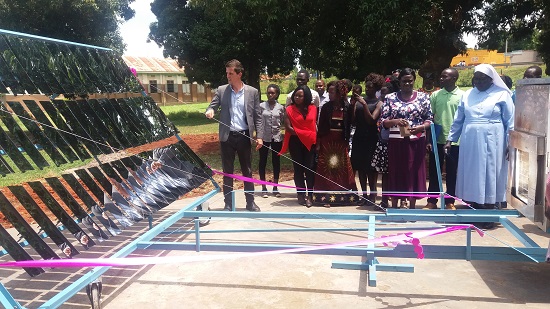 GoSol has invented a solar oven aimed at promoting a clean and friendly environment.

The oven was installed at the SmartUp Factory Gulu Hub as part of Plan International’s Youth Economic Empowerment programming.

12 youth have been trained to install, use and maintain the solar bakery and are currently running a solar-powered bakery offering cakes, bread, cookies, etc.”

The Solar Oven made out of mirrors and steel plates is capable of baking bread and cakes for commercial use.

Mr. Lorin Symington, the Gosol solar chief builder, the organization that partnered with Plan International in training the youth, explained that the solar oven will help address the question of environmental degradation.

“Most bakeries uses charcoal, firewood and electricity which has direct effect on the environment unlike this solar oven that only requires sunlight,” he said at the launch of the solar oven in Gulu town on Tuesday.

Mr. Symington says that the solar oven is able to bake about 40 kilograms of baking flour in a day, adding that it takes about 30 to 40 minutes depending on the sun heats and the kind of bread or cakes being baked.

“This solar oven is reliable and it just depends on sunshine, you don’t need firewood, charcoal or electricity to use it. It’s basically sun heat that comes as a result of the presence of sunshine which as a nation we are blessed because whether it rains or not, we have sunshine,” Mr. Symington explained.

He added that the solar oven doesn’t have a negative effect on the environment as the innovation was guided by the sustainable development goals (SDGs).

About the solar oven

The solar Oven contains a cook oven where the bread is placed.

The bread is mixed with the entire ingredient before placing it on the oven.

It takes about 30 to 40 minutes for a loaf bread to be ready for consumption, the same applies to queen cakes and others.

Inside the Oven, there is a thermometer to regulate the amount of heat being used.

Before you set the solar oven ready for use, the stand containing the reflector must be positioned to face the direction where the sun is rising or setting to get the sun rays for absorption and eventual heating.

It has to be pre-heated for 30 minutes to enable stability of the heat ratio.

How a startup plans to electrify Africa with cheap batteries