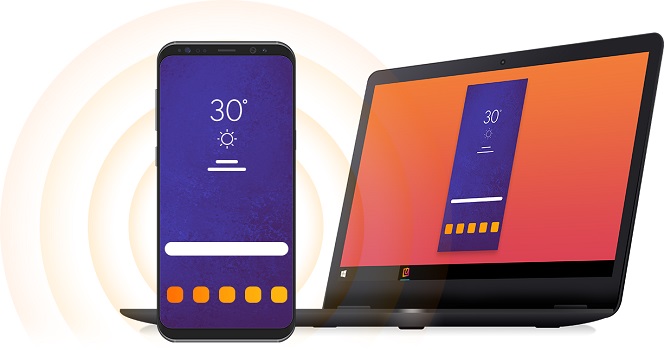 Screen mirroring is a wireless technology that allows you to transmit/cast/project your media playing on your smaller Android, Windows, or Apple device to a larger device with a bigger display.

In simple terms, this is a technology that can be used to project any media content from your small phone, laptop, iPad and many other devices onto a larger screen probably a TV Screen.

Screen mirroring provides a better viewing experience, most especially if the media you want to view is on your phone and you don’t want to keep holding the phone while watching it.

Content such as personal photos, slideshows, music, videos, games, and even online movies, from the internet or apps like Netflix, YouTube can be cast or sent to an external screen via a cable or a wireless connection.

The receiving device is the destination for the content you are trying to cast/project to display.

Then, the screen-sending device will utilize a screen-mirroring protocol, for instance, Apple AirPlay on iPhones and Google Cast on Chromebooks to project media to the screen receiving devices.

Screen-mirroring connections can be established in a number of ways depending on the devices that you are trying to connect.

There are hardware receivers such as Apple TV, Chromecast e.t.c, and software applications like Reflector that turn existing devices such as a Mac or Windows computer into robust receivers

Therefore you have to make sure that all the devices are compatible to screen mirroring and capable of carrying out the task at hand by selecting a corresponding hardware or software reciever.

Devices that support the technology

There are several devices that are compatible to screen mirroring. You must make sure that all devices are capable of carrying out the task at hand.

Your phone, or tablet should be able to cast data/media to the other mirroring device using remote access.

However in some phones, the feature can be enabled under the Settings section, and also some may require a device that can be plugged onto them to enable the remote access.

Any device running Android 5.0 (Lollipop) should be able to natively cast its screen to Reflectors.

Additionally, some devices running Android 4.4.2 and using the Chromecast application can cast screens.

These device brands include Samsung, iPhones, Sonny among others which have the capability to cast their screens onto a Reflector.

When it comes to TV sets, you can try Samsung, Hisense among others. These comfortably accept screen mirroring.

In addition, some TVs have screen mirroring capabilities built in them while others may need a media streaming device connected to an HDMI port on the TV.

Therefore, when it comes to Phones, most of them use screen mirroring apps like ApowerMirror, AirServer Connect, Samsung Smart View, and Mirroring Assist among others.

These apps enable phones to cast easily on to TVs. Also, the interesting bit about mirroring is that if devices are of the same make, they are easily compatible with each other.

For example, an iPhone would be very compatible with Apple TV. This is because all are Apple products.  iPads as well are compatible to Apple TV.

Who uses the technology?

Now that you know how screen mirroring works, let’s look at applicability.

Professionals who often need to present content to a big screen during meetings.

Screen mirroring technology makes it easy to share presentations or reports, brainstorm and collaborate in the places they meet, like conference rooms and even huddle spaces.

General users can be family or friends who want to mirror and stream movies, videos, photos, mobile gameplay, music and more from their devices to TVs with a compatible receiver for fun entertainment.

Using the mirroring app is simple and easy after confirming your devices are compatible to screen mirroring. Following the steps below will allow you to mirror your media.

1. Open an app on your device that lets you view media

2. Play any available song, movie or slide show of your photos in that app

3. Tap the screen and tap the mirroring icon that appears there to execute the application

With your available device to mirror the media turned on, you will see it listed there, tap it to connect and you will have the media mirrored.

And lastly, you can be able to control all your media playing using your Phone, iPhone or iPad. You can stop, forward and pause the media according to your feel.

How to remotely access your computer from your phone

How to troubleshoot HDMI connection problems