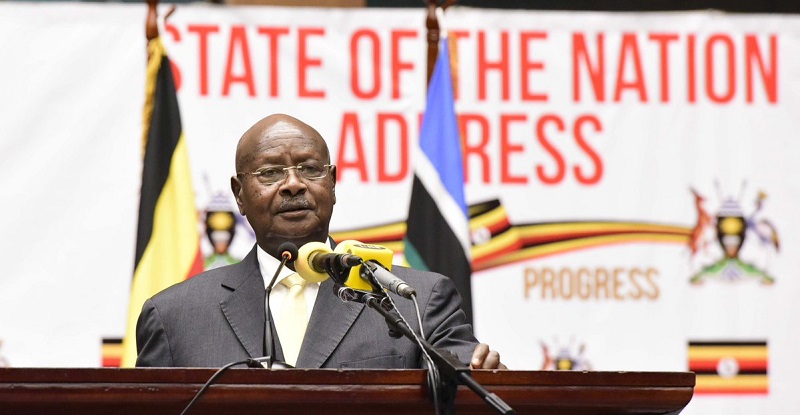 President Yoweri Museveni on Wednesday revealed that the information and communications technology (ICT) sector registered the most growth in the 2017/2018 Financial Year.

Presenting the State of the Nation Address, 2018 at Serena Hotel in Kampala, President Museveni said that Uganda’s economy was “growing reasonably well”, with ICT growing at 7.9% per annum, industry at 6.2%, services at 7.3%, and agriculture at 3.2%.

With ICT presented as the biggest accelerator of economic growth by most analysts, this affirms a recent Harvard report that predicted that Uganda will be one of the fastest growing economies in the world by 2025.

The growth in the sector could be attributed to a number of steps the government has taken to boost innovations and relevant infrastructure in the country.

For instance, the Government of Uganda (GoU), through National Information Technology Authority Uganda (NITA-U), is implementing the National Data Transmission Backbone Infrastructure and e-Government Infrastructure (NBI/EGI) project to connect all major towns across the country including Government Ministries, Departments and Agencies via an optical fiber cable network.

With this, the government hopes to reduce the cost of public administration, support delivery of secure e-Government services as well as enhance communications services in the country.

Starting July 2018, according to NITA-U, the charges will reduce further to $50 per 1Mbps.

The highlighted text that has put a smile on all our faces at #NITA.
We reaffirm our commitment to ensuring that the ICT backbone remains secure, robust and always-on.
That way the Government can provide reliable e-services to #UG citizens. #SOTNUG18 pic.twitter.com/o0HX5uoseK

The project, however, has been rocked by scandals, especially on alleged exaggerated costs of material and bribery of officials by foreign companies to secure contracts.

In April of this year, cabinet approved the commercialization of KIIRA EV, an electric car developed out of an innovative research project by Students of Engineering at Makerere University.

Running on rechargeable lithium batteries instead of petrol, the two-seater vehicle was built at a cost of USD 35,000 (128 million Shillings) and tested on a 4 kilometre test-drive in 2011. Government wants to inject over Shs120 billion in the innovation over the next four years, and in the forthcoming financial year about Shs24 billion of this will be allocated for the project.

Government anticipates that the project will create over 2000 direct jobs and about 12,000 indirect jobs.

The ministry of ICT and National Guidance and that of Science and Technology Sector were both allocated a combination of 1.2% of the approved 32.5 trillion national budget for the coming Financial year 2018/2019.

Museveni also revealed that in the coming days, the Minister of Finance will announce the financial support “we intend to give to the groups that wish to join the manufacturing in the form of the enhanced micro-finance efforts and the Innovation in addition to the Women Fund, the Youth Fund and Operation Wealth Creation Fund.”

The Ministry of ICT and National Guidance is already running the Shs13bn Innovation Fund through which government is constructing an innovation hub and funding innovators with game-changing projects.

In his speech the president also praised some of the remarkable Ugandan innovators like Dr. Phillippa Ngaju Makobore, who has developed an Electronically Controlled Gravity Feed Infusion Set (ECGF), a medical device designed to accurately administer intravenous (IV) fluids and drugs by controlling the rate of fluid flow based on feedback from a drop sensor.

A graduate of electrical engineering from University of Alberta in Canada and currently pursuing an MSE in Biomedical Engineering at Purdue University, West Lafayette, USA, Makobore is among the 10 Ugandans that are currently in Kigali, Rwanda to showcase their projects at Africa Innovation Summit 2018.