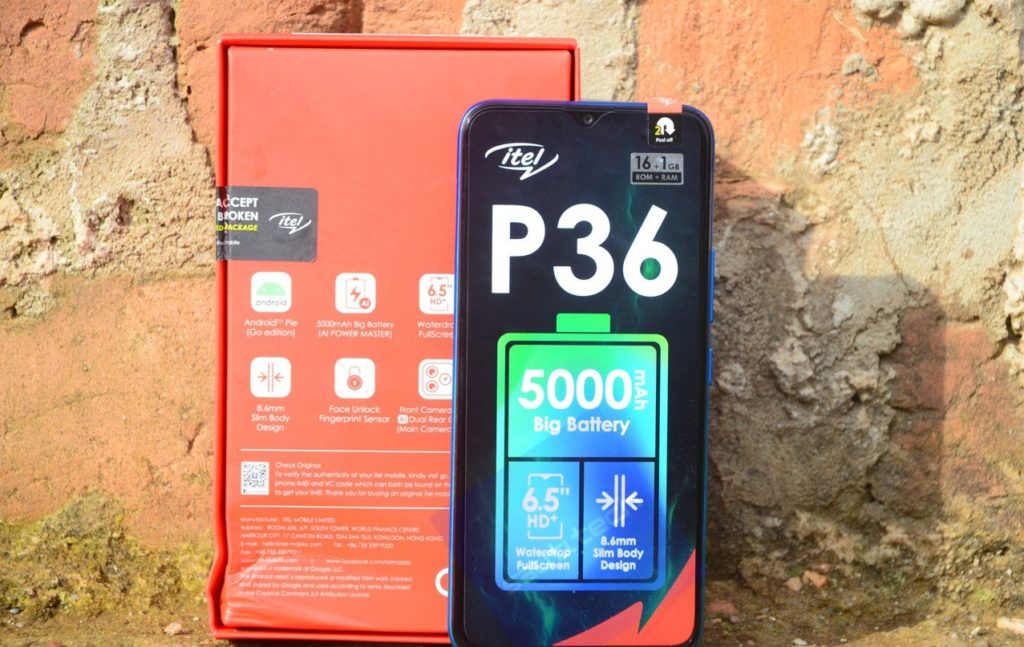 The itel P36 is the company’s brand new budget smartphone, and we’ve got the opportunity to hold and spend some time with it. This post will not only give you a better first-time look at the phone’s design, but also at its software.

On purchase, you get the phone in a bright red box definitive of the brand. When you unwrap it, you’ll find the phone, charger head, a transparent phone case, earphones, micro USB charger, and SIM eject tool. 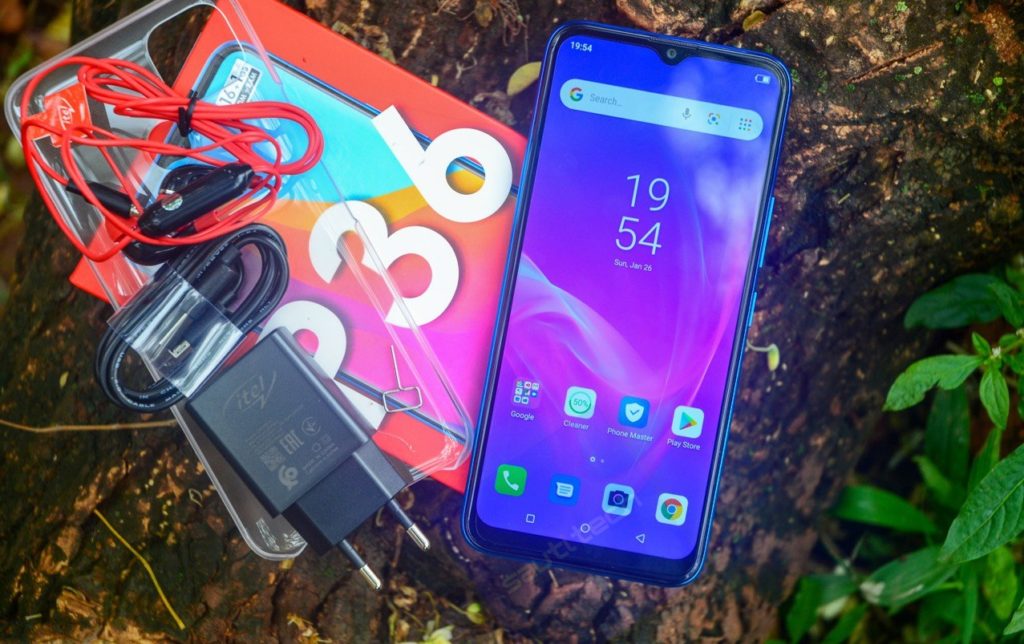 From an on-looker’s point of view, the itel P36 looks more expensive than it actually is. The phone is made mostly out of plastic, but it looks like it sports glass on the back. And to be specific, the design of its back was clearly inspired by the iPhone 11, while the front side reminds us of the Infinix S4.

The P36 includes a water-drop notch on the front, with less bezels and a chin that we’ve not seen on any itel device since the brand’s inception. This lays down the red carpet for the new phone! That’s not all, the device features a 6.5-inch 1600 x 720 display, along with 1GB of RAM and 16GB of expandable storage. The device is powered by the Unisoc SC7731E 1.3GHz Quad-core processor, while it sports an impressive 5,000mAh battery. 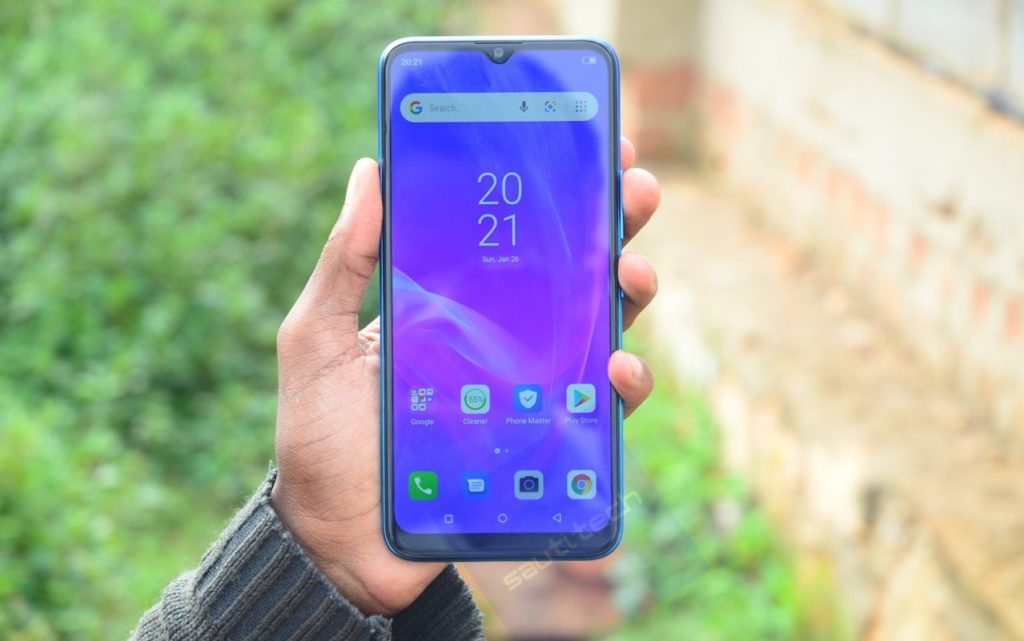 On the back of the phone, you will be able to find two cameras, in a rare design you might easily mistake for a flagship device. The phone sports a primary 8-megapixel, and a secondary one, in addition to a LED flash. A single 8-megapixel camera is found on the device’s front side right in the notch, and the phone includes a fingerprint scanner on the back right close to the rear cams. There’s also a facial scanning technology can unlock the phone in less than a second. 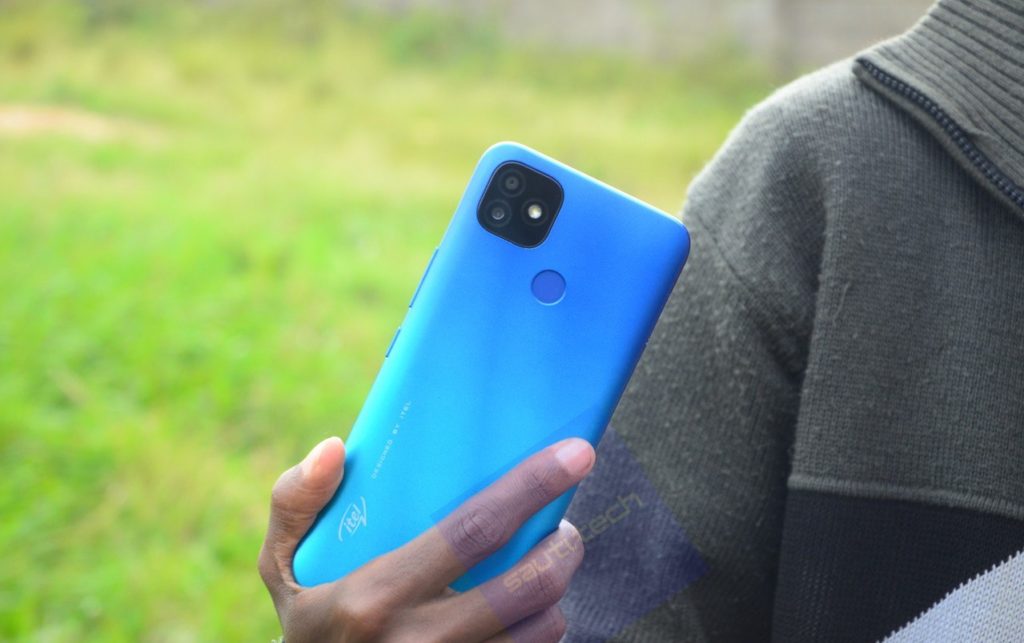 The P36 ships with Android 9 Pie, but Android Go edition of that software which is optimized for low-end devices. From the few days of usage, it is by far the best up-grade that the company has made for any of its products.

Well, genuinely speaking, the P36 is a big deal! Forget the past, when holding an itel phone was for those that can’t wait to ask for the price tag. This new power-horse changes times! To be precise, the P36 has everything one would need in an entry-level smartphone, yet affording to offer more for the price it comes with.

A large screen is a welcome idea for the new phone, the huge battery, much improved software, and the fact that the design is beautiful. It’s all a win!

The itel P36 goes for UGX 310,000, which is a rather very attractive price when you consider the specifications that itel fixed in this handset. We will be testing its battery life and overall performance further over the next few days, so that we can give you the full review.