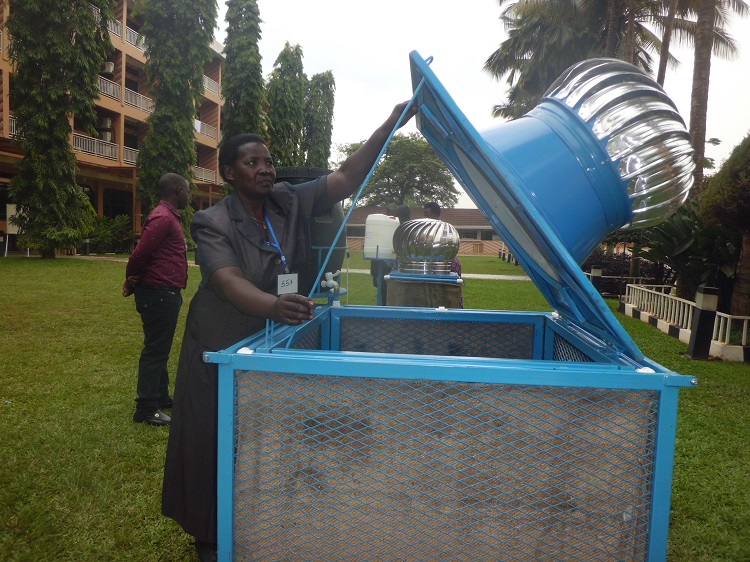 It is not easy to preserve milk fresh overnight for the early morning supply in the market minus storing it in a cooling apparatus. Small-scale farmers keeping cows for milk production are usually faced with the challenge of selling their milk harvested in the evening the next morning because it tends to get spoilt by daybreak.

However, a good number of urban milk producing farmers have embraced the use of milk cooling machine made by a team of technology innovators led by a visiting tutor at Makerere University, Prof William Kisaalita, who is based at the University of Georgia in the USA.

Smallscale farmers in districts of Wakiso, Mpigi, Kamuli, Buikwe, Rakai and Kampala have taken on the use of the milk cooling machine commonly known as evakuula.

Rachael Nsangi, from Namayumba town council, Wakiso District who owns five cows which she keeps for milk production explains that she has been working at a loss since 1998 when she started keeping cows for milking purposes.

“A farmer who is keeping cows for milk production is usually business minded. This means milking is done in the evening, kept overnight to be sold the following day as well as milking early morning for the same market. But milk kept overnight will not remain fresh unless preserved in a refrigerator which most farmers do not have. When my friend told me about the Ewakuula machine, I quickly embraced the technology,” says Nsangi.

Nsangi is one of the lucky farmers who obtained the machine free in 2014 as a pilot study beneficiary. Today the cheapest evakuula machine costs Shs2m.

She is able to cool a 15 – 20-litre can overnight before supplying to milk companies such as Jesa Farm Dairy, Lato Dairy and Shumuk Dairy Products among others. She sells one litre at Shs1,000. Besides she is able to make sales from the morning milk production measuring about 15 litres in 15 cans.

Joseph Galiwango, a research assistant with smallholder fortunes explains that the milk cooler comprises an evaporative apparatus made of jute fibre and this will allow hot vapour from hot water to evaporate to the atmosphere.

It is designed to use biogas which most farmers obtain from cow dung on their farms but they can also use bricked stoves which uses minimum firewood.

What is expected of a farmer is to boil water at 100 degrees centigrade and insert the milk can in the hot water. It is left in for a period of 45 minutes and then removed and placed in the evaporating cooler.

The cooler is connected to a small tank containing water. Warm air coming from the surroundings will be absorbed and cooled using a fan.

The equipment has a capacity of keeping four cans each with 20 litre-capacity. The circulated water can be collected in a container and recycled back into the cooling system.

There is another smaller version of equipment able to contain two cans of milk at the same time farmers can use it for keeping trays of eggs at a monitored temperature for hatching at a later stage. This is applicable for farmers who own incubators.

“With this technology, dairy farmers will not lose their milk. More farmers need to adopt it,” he says.

Once the milk is cooled in this equipment, it can stay for 24 hours without getting spoilt. Most farmers who have embraced the technology no longer face loss in milk business because they can keep it fresh and look for the market as it is kept in the cooler.

The technology also helps farmers deliver quality milk to the market which is equivalent to processed milk. It has increased small-scale farmer productivity in terms of milk which is delivered in the various local markets.