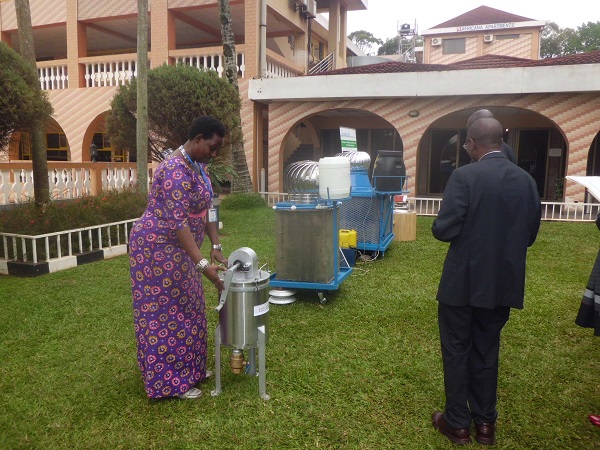 Dairy farmers in Western Uganda are known for processing ghee from milk. However mo, st people engaged in processing ghee have been doing it using a rudimentary method. They have been isolating fats from cow milk before fermenting to process it into ghee using calabash.

A group of science graduates from Makerere University has ventured into inventing a local fabricated machine to process oil obtained from milk into ghee.

Winnie Buryo who has been into ghee processing for more than 10 years is a beneficiary of the machinery called Ize Chan. She narrates how the equipment operates.  “I have been using traditional methods to process ghee,” she says.

However, when Buryo heard about scientists from smallholder fortunes engaged in fabricating milk cooling equipment, she decided to get sensitization about this machinery called evakuula.

Must read: Makerere to reinforce research with online repository system

But since her target was to get a modern ghee processing equipment which the same team were fabricating, she decided to switch her focus.

She explains that the machine is manual and does not require electricity for its operation.

-Once farmers have separated cream from milk, which is fermented for one or two days, it is then poured into Ize Chan which has a handle and an outlet.

-Once the handle is used to blend the cream continuously, ghee is let to pass through the outlet and in 20 minutes the content is ready for sell.

-The equipment has two separate apartments which allow the residue to settle down while the cream floats on top.

According to Moses Agaba, a livestock farmer who is also into ghee processing, a new Ize Chan processing unit costs Shs3m.

“Life has never been the same since the day I acquired this machine. Because of the technology every week I earn Shs5m from selling processed ghee,” says Agaba who runs a livestock farm in Kayunga.

Philip Mukasa, a researcher at Smallholder Fortunes is encouraging dairy farmers to invest in the machine. “We offer incentives such as payments in installment to farmers,” he said.

Buryo who has been using the machine for last one year is able to process ghee in bigger volumes as opposed to the traditional methods.

In order to get best quality ghee, she advices farmers to keep local cattle breed which produce less milk but full of cream.

However as farmers began appreciating the Ize Chan technology, they passed the message to other dairy farmers and there was an outcry for ghee processing machine which the team did implement.

The machine is long lasting and for Buryo, she has not experienced any breakage to incur maintenance costs.

She advices farmers engaged in gee processing to acquire it other than using gourds.

Inside endorsed IT master plan to curb sexual harassment at Makerere