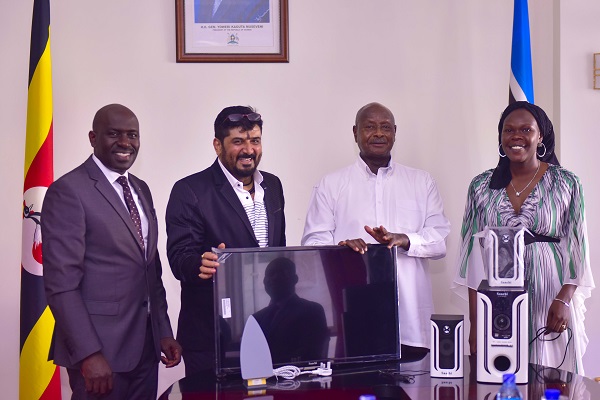 President Yoweri Museveni has promised to offer all the necessary support to Saachi, an electronics-assembling and -distributing company, in order to realize its potential in Uganda.

According to a statement released by State House on Wednesday,  President Museveni met with a delegation of proprietors of Saachi on Tuesday at State House, Entebbe.

Led by its Director, Anand Nainani, the group briefed President Museveni on their company’s investment portfolio in Uganda, according to the State House statement. 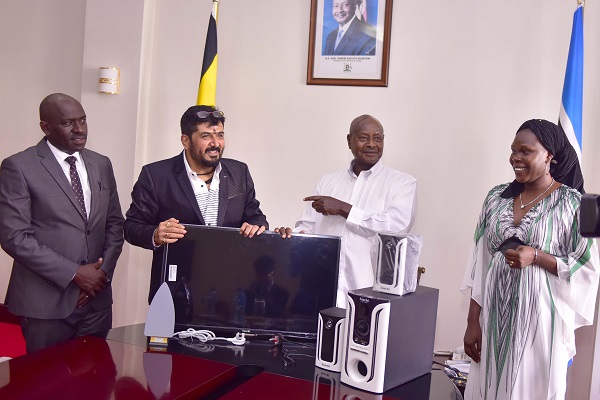 The President Yoweri Kaguta Museveni together with the Director of Saachi Manufacturers Uganda Limited , Anand Nainani (left) and the State Minister for Trade Evelyne Anite together with one of the Saachi staff pose for a picture with some of the Products manufactured by in company in Uganda shortly after their meeting at state house Entebbe on Monday 3rd July 2018.

Saachi Manufacturers (U) Ltd which has been importing a variety of electronics and home appliances since 2004, started assembling and making their products in the country in 2017 including LED television sets, loudspeakers, DVDs and flat irons, among other appliances.

Museveni assured the group of government’s support in order to ensure that the company exploits its potential fully, reads the statement.

Nainani, according to officials, briefed Museveni about the company’s high quality and affordable products, saluted him for his support to the company and the favourable investment trend in general in the country.

Saachi products enjoy customer choices not only in Uganda but also in the regional market as well.