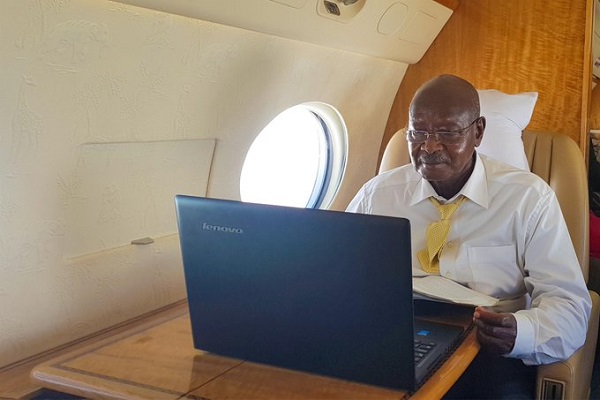 President Yoweri Museveni or his social media handlers on Monday evening posted a picture of him using a Lenovo laptop while traveling to Japan.

The picture, which shows Museveni pensively staring at the laptop’s screen, has since garnered wide-ranging reactions, with majority wondering why the President was using such a model of a laptop, given all the resources available to him.

We bring you some of the amusing comments below.

Fellow Ugandans and particularly, the Bazzukulu. I thank all that read my message and those who responded. I have been using the flying hours to Yokohama, Japan to read through comments and prepare responses that I will share soon. Meanwhile, @stevekizire DM your Mobile contact pic.twitter.com/diH8uRhtGD

but you can’t even get a better and securer computer like this one? 👉 pic.twitter.com/ov8Vp5yB6f

A less than UGX 1Million Lenovo at Kampala Road, Yet his purchase order has UGX 200Million for the lappy…..

Hahaha.. guys you supervise in parastatals are bossing around with latest UGX 20M Macs and MacBooks, you are here using some old 5.5KG Lenovo.😭🤣

@Microsoft Windows 10 in action…. Our Prezzo

My President uses the same PC brand as me, his muzukulu…😋😋😋 Longlive Mr. President 👍🇺🇬👍 pic.twitter.com/IMGFMlmwlT

You took power in the age of typewriters. The computer generation looks better better on the generational leader. One whose privacy is evaded by your spyware and you get busted. The point of spying is not to be caught. 😂😂 pic.twitter.com/4gx9IVsfc7

Dear @URAuganda,
Please bring a tax invoice for @Lenovo. The multinational company should pay for this advert.#Uganda President Museveni can be seen using a #Lenovo laptop inside a presidential jet.

Now since i spotted this, i’ll take 10% of the amount. 💵💰👍😆 #business pic.twitter.com/CQCy3Iqzvg

Am getting worried how uganda will move forward if our president is still using this Lenovo..🤔

Mr. President, why didn’t your @StateHouseUg guys buy you a #MacBook not this 12kg #Lenovo machine?

Maybe it comes with nuke codes, but man…that’s a huge machine!
I can visualise they will come out to say they bought the machine at a staggering $2m.
I rest my case.
Peace ✌️