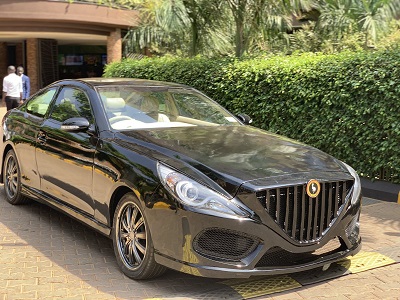 The National Enterprise Corporation (NEC) has entered an agreement with the Kiira Motors Corporation (KMC) to manage the manufacturing and commercialization of the Ugandan-made sedan, the Kiira Electric Vehicle SMACK aka Kiira EVS.

According to Nile Post, the Memorandum of Understanding between the two bodies was signed Wednesday by Maj. Gen. James Mugira, the NEC managing director and Paul Isaac Musasizi, the Chief Executive Officer, KMC.

NEC, which the is the commercial unit of the Uganda People’s Defense Force (UPDF), is already repairing and manufacturing a number of products, including armored vehicles, electronic equipment, ordnance, and agricultural equipment.

NEC was founded in 1989 and it is headquartered in Plot 58, 6th Street, Industrial Area in Kampala.

The Orders and manufacturing

The first version of the Kiira Electric Vehicle SMACK was recently unveiled to the public for road testing, attracting a ton of attention and positive reviews.

According to reports, people have already started placing orders for the car that will cost buyers anywhere between $25,000 (Shs92 million) to $35,000 (Shs129 million) before taxes.

ChimpReports reported Thursday that the Uganda Communications Commission Executive Director Eng. Godfrey Mutabazi was among the first people to show interest in the car.

The Nile Post, quoting a statement, revealed that the facilities for manufacturing will be located at the Jinja industrial and business park at Kagowa Village, Mawaito Parish, in Kakira Town Council in Jinja district.

Reports indicate that the vehicles will be ready for sale by 2023.