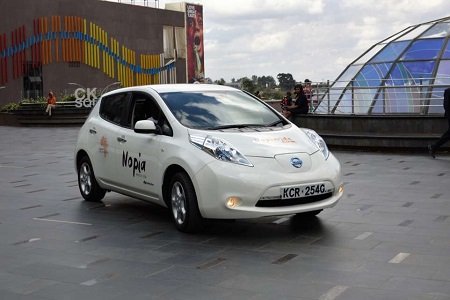 EkoRent, a Finland-based company which has been testing Nopia Ride, the first electric taxi-hailing company in East Africa, has promised to start selling its electric cars in Kenya in the first quarter of 2019.

Nopia Ride entered its trial phase in Kenya in August of this year with two charging stations located at the Two Rivers Mall and the Hub in Karen.

The drivers who enrolled for the testing phase would charge the vehicles for free.

Would you like to join our platform as a Nopia partner today or invest in your own EV? Visit our website today at https://t.co/hAfrigRuqx for more information on how to "APPLY TO DRIVE"#electricvehicles#economic#circulareconomy#climatechange#cleanenergy#GoGreen pic.twitter.com/10CARwLVvd

Now, the company says the trail phase was successful, with many drivers showing interest in the cars.

According to the company executives, by the end of 2019, they want to have 300 drivers attached to Nopia Ride and their target is to have 1,500 vehicles in Nairobi by the end of 2021.

EkoRent founder Juha Suojanen has told The East African that the company will also be looking to scale the service across East Africa.

“We shall officially introduce these cars in the market in the first quarter of 2019, and we are hoping to scale up to 300 vehicles by the end of the year,” said Mr. Suojanen.

“We want to ensure that the model works then possibly expand it to other towns in the country. We shall then expand to East Africa then the continent,” said Mr. Suojanen.

Most electric vehicle companies that have expressed interest in East Africa (Ampersand, Rwanda; Zembo, Uganda; Nopia Ride, Kenya) have assured drivers that their vehicles will be cheaper to maintain than the fuel-powered automobiles.

With the ever-increasing costs of gas, electric vehicle makers and retailers are hoping to cash in on this opportunity by luring drivers with better options.

In the ride-hailing sector, the biggest cause of protests has been driven by the reluctance by ride-hailing companies to increase fares yet drivers are spending a lot on fuel to ferry passengers.

Must read: Why cost of manufacturing a smartphone will rise

According to Nopia Ride, batteries that power their electric vehicles can be used for about 10-15 years and even after the power capacity of the batteries declines for driving purpose, they can still be used for years for example as home energy storage.

The other reason electric cars are being vouched for is because of being environmentally friendly.

At the launch of Nopia Ride, Kenya’s head of Public Health lauded EkoRent for bringing the cars to Kenya, adding:

“In line with the United Nation Goals for Sustainable Development, I am happy to see Kenya continue to play her part particularly in the pursuance of sustainable and clean energy. I urge more players in the private sector to prioritize developing environmentally friendly technologies and complement the government’s efforts on implementing them.”

On why they picked Kenya as the first country of operation, Suojanen says, “Nairobi is a fast-growing city with considerable traffic congestion. The World bank reports that the transport sector accounted for more than half of all the carbon dioxide emissions Kenya produced in 2014. Nairobi City can benefit from Nopia electric ride service that helps in solving the increasing emission and urban transportation challenges while creating jobs for the populace.”

To access Nopia Ride, Kenyans will use the company’s mobile application which functions just like any other ride-hailing app.

Users will pay using either cash or mobile money; EkoRent partnered with Safaricom to facilitate this.