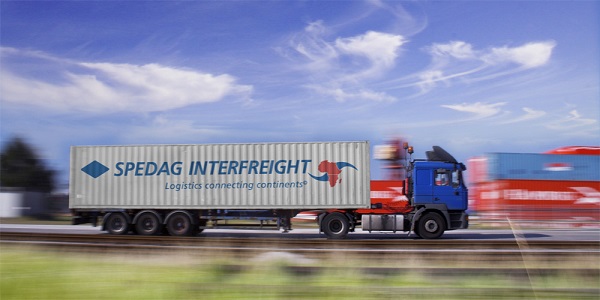 The worry of monitoring movement of goods by businesspersons, who use cargo services to ship merchandise from overseas, has been lessened after a digital monitoring system has been launched in Uganda.

Spedag Interfreight handles cargo for hundreds of business entities in the region.

Speaking at the unveiling of the PeriSpoor App at their offices in Kampala, Mr. Dilip Bhandari, the Spedag Interfreight chief executive officer for East Africa, said the system now makes it easy to track cargo on the sea, by railway and on roads.

“This innovative product allows the tracking of cargo along its way by sea, rail and roads and this is done from or to any seaport of the globe to the final destination here in East Africa,” he said, adding: “Our customers who use our services to deliver cargo will track their goods both by mobile app and web app showing the position in real-time on Google map.”

The officials also said the new technology is difficult to hack into by anyone targeting to divert cargo.

Mr. Daniel Richner, the Spedag Interfreight chairman, said before the introduction of the digital tracking system, there have been incidences where clients could never know the exact whereabouts of their cargo.

“The speed of its realisation (application) in only a few months is impressive and the potential for enhancements are enormous,” he said.

The clients will not pay any extra money to Spedag to use the system to track their cargo but will only need to have paid their Over the Top Tax  in using a mobile app.

So far, the system has been launched in Kampala and Kigali (Rwanda) and Spedag plans to apply it in their new establishments in Zambia, DR Congo and Burundi.