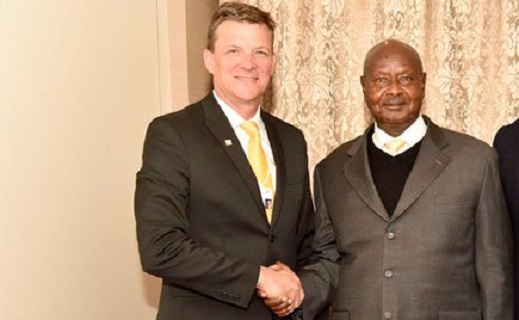 President Yoweri Museveni will again meet the MTN Group Chief Executive Officer Rob Shuter, just a month after their last encounter in Davos, Switzerland where they discussed wide-ranging issues that have created a rift between the Ugandan government and the telecom company.

The government of Uganda has lodged a number of accusations against MTN Group’s unit in Uganda, leading to the deportation of senior officials in the company.

MTN Uganda is also yet to have its license renewed. In their January meeting, President Museveni requested MTN to float shares on the Uganda Stock Exchange so that Ugandans can partly own the company.

Museveni and Rob Shuter will meet at the Africa Now Summit which will take place at Munyonyo Commonwealth Resort in Kampala.

The summit is an initiative of Africa Strategic Leadership Centre (ASLC) and will be conducted under the theme, ‘Towards a secure, integrated and growing Africa’.

The ASLC is a foreign policy think-tank, which collaborates with leaders from the public and private sectors, committed to Africa’s progress.

Natasha Museveni, from wanting to be a nun to entrepreneurship